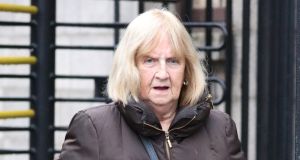 A cleaner who suffered a serious arm fracture after falling down a stairs at Dublin’s Blackrock Market has been awarded €105,000 damages by a High Court judge.

Mary McKenna was aged 74 at the time of the fall on a wooden staircase.

Ms Justice Deirdre Murphy was satisfied Ms McKenna fell as a result of “an inappropriate stair arrangement” and the fall has had “a devastating effect on her life.”

Until her fall, Mrs McKenna was remarkably independent and able to carry out the physically demanding job of cleaning, the judge said. She was paid €25 for working three hours one morning a week at the market.

“The fact that she was able to do it at 74 years of age, I am impressed by that. For a person her age, she will never get back what she had.”

The judge was satisfied Mrs McKenna suffered a serious injury which has had a serious effect on her.

The incident had had a major effect on the nature of Mrs McKenna’s existence and “her ability to earn pin money”, she said.

The damages were awarded against businessman Nicholas Roche, owner of Blackrock Market, Main Street, Blackrock, Dublin. He did not attend court for the hearing and judgment was obtained in default of appearance.

Ms Justice Murphy said she was satisfied Mr Roche had been served with notice of the proceedings and also granted costs against him.

Mrs McKenna, now aged 79, Achill Road, Ballybrack, Co Dublin had sued Mr Roche, her employer and the proprietor of Blackrock Market, Main Street, Blackrock, as a result of the fall on October 28th, 2014.

It happened as she descended a wooden staircase which was exposed to the elements.

Mrs McKenna’s counsel Paul Burns SC told the court it had been raining on the day of the incident and the wooden staircase was exposed to the elements. Their case was the handrail was “totally unsuitable” and Mrs McKenna slipped, couldn’t stop herself and fell heavily on her left shoulder, he said.

She fractured her arm and had to have surgery the next day. A metal plate and pin were inserted and she has been left with a limited range of movement in her shoulder, counsel said.

In evidence, Mrs McKenna, a mother of four and a grandmother, said she had been working for nine years as a cleaner at the market.

“I was coming down the stairs. I slipped and I fell back. The stairs were very wet and there was heavy rain that day.”

She was in pain and her husband Barney came and collected her and brought her to hospital. She said that, afterwards, she could not do normal housework or reach up with her left hand to hang clothes out on the line and her husband has to help her.

Her cleaning work at Blackrock Market was “hard work” and she never went back to work after the fall, she also said.