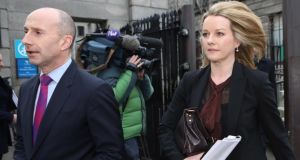 RTÉ presenter Claire Byrne told the High Court she thought a former minister of State “had gone doolally” on her radio programme.

Ms Byrne said she thought claims by Joe Costello that Sinn Féin political manager Nicky Kehoe was a member of the IRA army council controlling how councillors voted at meetings were “outrageous”.

She said her tone towards Mr Costello, then a Labour TD and a former minister for trade and development, was incredulous.

“I thought he had gone doolally,” she said.

“I remember sitting there thinking: ‘Where is this coming from?’ I expected him to represent government policy and what he was doing was bringing it down to local politics. My tone was incredulous because that is how I felt at the time.”

She was giving evidence as part of RTÉ’s defence of a defamation action against it by Mr Kehoe, a former city councillor and Sinn Féin director of elections who is now employed as a political manager by the party.

He says he was falsely described by Mr Costello, on an October 2015 Saturday with Claire Byrne live panel radio programme, as a former chief of staff of the IRA who was controlling how Sinn Féin councillors on Dublin City Council voted.

In her evidence, which began on Friday afternoon, Ms Byrne said that after Mr Costello made the comments, her producer, Kay Sheehy, pressed the talkback button which allowed the producer talk to her. The talkback button is a warning system between presenter and producer and a click came on in Ms Byrne’s headphones.

She said she thought what Mr Costello had said was outrageous and a strange thing to say and she was about to intervene when another panellist, Sinn Féin’s Eoin Ó Broin, spoke and named Mr Kehoe. Before that she did not know who Mr Costello was talking about, she said.

Asked by her counsel Cian Ferriter about a suggestion from Mr Kehoe, during his evidence, she should have cut Mr Ó Broin off from naming Mr Kehoe again, she said she felt if she had stopped Mr Ó Broin she would have been doing Mr Ó Broin and Sinn Féin a disservice.

RTÉ guidelines provide that presenters must act promptly when issues such as this occur. While this was quite an unusual instance, she had in the past stopped people from naming others during discussions and saw that as her professional duty, she said.

Earlier on Friday, Mr Kehoe told the High Court he did not accept he now had “zero reputation” when it came to his association with the IRA.

He accepted that would have been the case in relation to the 1970s and 1980s, when he was involved in IRA activities, but disagreed that it was so today.

Mr Kehoe agreed with Mr Ferriter that he was regularly referred to as a former IRA gunman.

Counsel said this was “very relevant to today”. Mr Kehoe replied: “That is why I am trying to clear my name.”

Mr Kehoe said that was in the context of the time, “that was 36 years ago”. He said he was different now and had had to work to re-establish his reputation.

Mr Ferriter also put to him that what he was saying in this case was that he was defamed because he was called a member of the IRA when he had been in the same organisation in the past.

Mr Kehoe replied: “What I am saying is RTÉ did not carry out their responsibilities right and protect my name”.

He said Ms Byrne should have done what other RTÉ broadcasters, such as Joe Duffy or Marian Finucane, do and have said “stop” as soon as his name was mentioned.

But, Mr Ferriter said, Ms Byrne did not know his Sinn Féin colleague on the radio programme, Mr Ó Broin, was going to jump in “at lightning speed” and demolish what Mr Costello had said.

The case, before a judge and jury, continues on Tuesday.