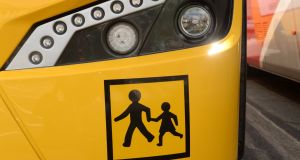 A High Court challenge has been brought over the State’s refusal to provide school transport to a primary school student with special needs. File photograph: Dara Mac Donaill/The Irish Times.

A High Court challenge has been brought over the State’s refusal to provide school transport to a primary school student with special needs.

The child lives in a rural area with his family and has been diagnosed as having autism. Following consultation with the Minister for Education, healthcare and educational professionals determined the boy should attend a primary school which is not the nearest one to where the family lives but is deemed most suitable to cater for his needs.

An application for the boy to be provided with school transport was made to the Minister but was disallowed on the basis it was not the nearest school. An appeal of the refusal was dismissed in July and the boy’s lawyers claim no reasons were provided.

The boy has, through his mother, brought judicial review proceedings against the National Council for Special Education, the Minister and the School Transport Appeals Board.

He wants an order quashing the refusal by the board of his appeal.

Permission to bring the action was granted, on an ex-parte basis, by Mr Justice Charles Meenan. The case has been returned to November.