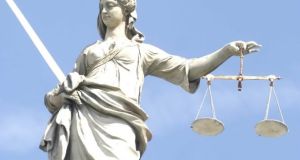 Dean Nolan had alleged negligence in the circumstances of his birth at the National Maternity Hospital, Holles Street, Dublin, in 2002

A teenage boy who suffered brain damage at birth has settled his High Court action for €7 million.

Dean Nolan, now aged 15 and preparing for his Junior Cert in June, had alleged negligence in the circumstances of his birth at the National Maternity Hospital, Holles Street, Dublin, on February 1st, 2002.

On Thursday, Mr Justice Kevin Cross was told liability had last week been admitted in the case.

Nolan, of Ardmore View, Gorey, Co Wexford, had, through his mother Kelly Campbell sued the hospital and the HSE.

It was claimed Ms Campbell was admitted to the hospital, labour was induced and her son was born after 2am on February 1st, 2002.

It was alleged, during labour, CTG readings revealed numerous and complex decelerations in the heart rate of the baby.

It was alleged, after five hours in the labour ward, oxytocin was commenced and later increased.

Nolan was delivered by vacuum/ventouse and was in poor condition at birth, requiring resuscitation and later intubation and ventilation.

It was further claimed there were failures to treat Ms Campbell and her baby with all necessary skill, care, diligence and expertise and to ensure delivery of the baby in an expedient manner particularly in the light of the CTG readings.

Charles Meenan SC, for the boy, said the case was unusual in that Nolan does not have any physical deficits but had deficits of a neurocognitive nature.

Experts on both sides agreed the boy did not have cerebral palsy, counsel said.

His parents Derek Nolan and Ms Campbell had made superhuman efforts in their care for their son.

The couple had had two other children and Ms Campbell, formerly a supermarket assistant manager, had to give up her job to look after her son, he said.

Nolan will need help for the rest of his life and it was clear the neurological deficit will impact on his life.

The parents and legal team were happy to recommend the settlement figure, counsel said.

Ms Campbell said her son was preparing to sit his Junior Cert and the family wanted to put the case behind them and get on with their lives.

Approving the settlement, Mr Justice Cross said it was a good one and will provide care for him for the rest of his life. He wished Nolan and his family well for the future.