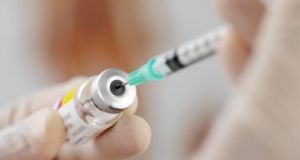 The now 15-year-old boy, suing through his father, is among 80 plaintiffs with narcolepsy.

An early hearing date will be sought on Monday for a High Court action by a teenager who alleges he developed narcolepsy as a result of receiving a swine flu vaccine when he was five.

The now 15-year-old boy, suing through his father, is among 80 plaintiffs with narcolepsy. Most of them remain intent on pursuing their claims for “adequate” compensation, their solicitor said.

The boy claims that, following his vaccination, he developed narcolepsy and cataplexy disorder, involving the sudden and unpredictable loss of muscle tone.

Last week’s settlement of an action by Aoife Bennett (26), a student from Naas, Co Kildare, who alleged she developed narcolepsy and cataplexy after receiving the Pandemrix vaccine at her school in 2009, had caused speculation about whether other cases might proceed.

The settlement was made without admission of liability and on confidential terms and was made following a mediation embarked upon after the case had been at hearing for several days.

Solicitors Michael Boylan and Gillian O’Connor, of the law firm Michael Boylan Litigation, represented Ms Bennett in her proceedings against the Minister for Health, the Health Service Executive, GlaxoSmithKline Biologicals, as manufacturer of Pandemrix, and the Health Products Regulatory Authority.

The State had previously indemnified GSK against claims concerning the vaccine and the costs of Ms Bennett’s case will be met by the Minister and the HSE.

Counsel for GSK argued during the hearing that research has yet to show a proven link between the vaccine and narcolepsy. It was argued on behalf of Ms Bennett that the HSE had failed to provide adequate information about the risks associated with the vaccine to allow people make an informed choice about it.

Michael Boylan of Michael Boylan Litigation represents up to 80 other plaintiffs, including several minors, pursuing cases arising from receipt of the Pandemrix vaccine.

Mr Boylan told The Irish Times at the weekend the firm has had contact with its clients and most are intent on pursuing their cases.

“My clients remain confident in the strength and merit of their cases and are determined to pursue their claims for adequate compensation,” he said.

The firm will apply on Monday for a hearing date for the next case and is also preparing the other cases.

During the hearing of Ms Bennett’s case, evidence was given that similar claims were settled in the UK under a confidential mediation process. The average settlements were £1 million and the highest was up to £2 million.

Following Ms Bennett’s settlement, there was some speculation the cases could be settled under a no-fault vaccine damage compensation scheme. An expert group report concerning such a scheme is expected to be provided within weeks.

Sources also believe any such scheme is likely to have a cap on compensation fixed at perhaps €200,000 for the most severe type of injury, with reductions for less serious injuries. That level of award “is unlikely to be acceptable to many plaintiffs”, one source said.