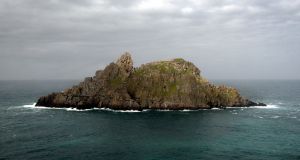 A boatman has challenged the revocation of permits allowing him to land visitors on the Skellig Michael site off the Co Kerry coast.

Sean Feehan has been taking passengers to the monastic settlement and Unesco world heritage site since 1980.

The Office of Public Works (OPW), which is responsible for the management and protection of Skellig Michael and issues permits allowing boat operators to land passengers there, told Mr Feehan last January that the two permits he had held were being revoked with immediate effect.

The OPW said the revocation arose from his pleading guilty at Caherciveen District Court in September 2015 to three offences under the Merchant Shipping Act.

The OPW cited safety concerns for visitors to Skellig Michael as its reason for the revocation.

In challenging the revocation in the High Court, Mr Feehan said that, aside from the conviction, his safety record was “exemplary”.

He said he is being treated unfairly, that he fears for his livelihood and has not slept since this “bombshell” was dropped.

Other boatmen convicted over safety issues had not had their licences revoked, he said.

In his action, he claims the revocation decision is invalid, unlawful and in breach of his Constitutional rights. He is also claiming damages.

Mr Justice Paul Gilligan granted him a temporary injunction preventing the OPW from issuing to other parties two of four permits for which it had invited tenders .