Bid for stay on jail order over Grangegorman property refused 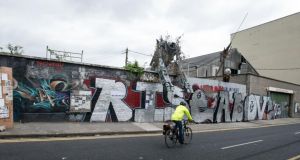 Properties at Lower Grangegorman and North Brunswick Street have been home to a number of people for more than two years and the occupants have established a garden where they grow food, run an art gallery space, cafe space, and a circus workshop. Photograph: Dave Meehan/The Irish Times

A man has failed to get a stay on a court order directing he be jailed for 14 days over failure to leave properties at Grangegorman, Dublin, which a Nama-appointed receiver wants to sell.

The jailing order, made against Stephen Bedford on May 19th last, was not implemented while Mr Bedford applied to the Court of Appeal for a stay pending an appeal against an earlier High Court order directing the properties be vacated, and restraining interference with receiver Luke Charleton’s efforts to sell them.

The properties at Lower Grangegorman and North Brunswick Street have been home to a number of people for more than two years and the occupants established a garden where they grow food, run an art gallery space, cafe space, and a circus workshop.

Should the receiver’s application be granted, a number of people will be made homeless, the court was told.

Mr Charleton, appointed by Nama in 2012, wants to sell the properties to go towards repayment of a debt of €21.9 million owed by businessman Paschal Conroy.

On May 19th, Mr Justice Paul Gilligan ordered Mr Bedford be jailed for 14 days or until such time as he purges his contempt of the judge’s order of March 24th, directing all those living at the properties to leave there by May 4th.

The judge said it appeared some 20 other people were also residing at the properties and he would issue a warrant providing for them to be brought before the court to explain why they should not be also jailed.

At the Court of Appeal on Thursday, Mr Justice Peter Kelly ruled Mr Bedford had established no grounds for a stay on the jailing order against him pending appeal.

Mr Bedford had been on the properties for three years at most, and perhaps as little as 18 months, and, from what he had said, appeared to have no legal entitlement to be there, the judge said.

The High Court had also been satisfied the receiver was entitled to possession of the properties and had made clear to Mr Bedford what was necessary to purge his contempt.

He had to leave the property, undertake to abide by the courts orders and to apologise. “Whether Mr Bedford goes to jail is up to him,” the judge added.

‘I’m a man who does not use money’

When a solicitor for the receiver sought costs of the stay application, Mr Bedford said: “All I can say is I’m a man who does not use money.”

Mr Justice Kelly said: “That’s remarkable, we would all love to be able to do that.”

Earlier, in seeking a stay, Mr Bedford said he wanted an opportunity for a full hearing of his case against eviction from the properties.

Nama was failing to explore the housing social and community use provisions of the Nama Act in relation to the properties and the receiver and his agents had done little with the properties over a number of years, he said.

He said a motion for directions for the hearing of the appeal against the March High Court injunction directing the properties be vacated was listed for July 31st and, prior to that, it was neither fair nor just that any persons in occupation of the premises should be in fear of losing their liberty.

He had been invited onto the properties about three years ago by a person who was no longer an occupant and believed he had a lawful right to be there. When the judge said it seemed he was a trespasser, he said: “I am not a trespasser, it’s my home.”

Mr Bedford was deliberately choosing not to purge his contempt, the solicitor added.