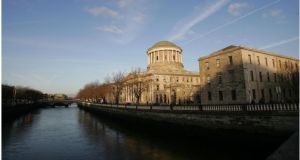 The court heard under Pakistani law, it was permissible for the man to marry a third wife there without at that stage having been divorced from the second. Photograph: Bryan O’Brien

An Afghan man with refugee status in Ireland has failed to get a High Court order overturning a refusal of his family reunification application for his third “wife”, due to give birth to their child soon, and her daughter from a previous marriage.

The man’s first wife died in 2012 and he divorced his second wife a year after his third marriage, the court heard.

The Minster for Justice has refused reunification for the third “wife” on public policy grounds after finding she was not a wife because the man was married to another woman at the time of his third “marriage” in Pakistan in 2016.

The Minister had permitted reunification in relation to the man’s two brothers and two sons from his first marriage and is reconsidering his refusal of reunification concerning two nephews of the man.

In his judgment, Mr Justice Richard Humphreys said an actual polygamous marriage involving a second or subsequent spouse is contrary to public policy and the Minister’s refusal in relation to the third “wife” was simply an application of the law.

The Minister correctly decided recognition of such a marriage would be contrary to public policy and his approach was consistent with European standards, the judge held. He rejected further arguments, including that the Minister erred in deciding the man’s third marriage remains polygamous.

Noting an application by the man for non-statutory family reunification concerning the third wife and her daughter has yet to be decided, he said, because that was an “alternative remedy”, it was another basis for refusing this application.

He noted the man’s lawyers had referred him to a judgment last July on another case by the High Court’s Mr Justice Max Barrett which described such an alternative remedy argument as a “red herring” and also indicated there was “generally” a binding obligation to follow jurisprudence of European Court of Human Rights (ECHR).

Mr Justice Humphreys said he himself had, in an earlier judgment, come to “exactly the opposite conclusion” on the alternative remedy point.

The statutory obligation is to “take due account of the principles laid down” in case law of the ECHR, not to follow the case law as such, whether generally or otherwise, he added.

Earlier, the judge noted the man, aged in his late 30s, claimed to have suffered persecution in Afghanistan, came here in March 2008, was refused asylum and lost an appeal over that refusal. His first wife, whom he married in 2001, died in 2012 and he married a second time in 2013.

While stressing he was not making any “finding” in that regard, the judge said “many of the features prevalent in the marriage of convenience industry” were present in this case.

The State had not argued the second marriage was invalid as one of convenience and the court must proceed on the basis it was valid, he said.

Two months after the second marriage, the man got temporary permission to remain here and “almost instantly” broke up with his wife who had left Ireland by early 2014.

In July 2016, he got refugee status – following a reconsideration of his application as directed by another High Court judge – and shortly afterwards travelled to Pakistan to marry an Afghan citizen, whose first husband died in early 2015.

The man had known the third wife since childhood in Afghanistan and the court was told, under Pakistani law, it was permissible for the man to marry a third wife there without at that stage having been divorced from the second.

In late 2016, the man submitted his application for family reunification.