John Dundon’s solicitor has said his client may appeal his conviction for murder. 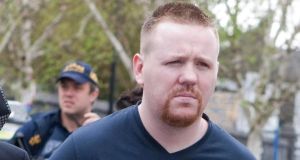 The Special Criminal Court has found that John Dundon was responsible for the killing of rugby player Shane Geoghegan in Limerick almost five years ago.

John Dundon has been sentenced to life in prison for the murder of rugby player Shane Geoghegan in Limerick almost five years ago.

The Special Criminal Court ruled today that evidence in the trial pointed “overwhelmingly” to his guilt in directing and organising the killing.

The Garryowen player was shot dead down in a case of mistaken identity as he walked home from watching a match in a friend’s house in Dooradoyle, Limerick on November 9th, 2008.

The 28-year-old died of gunshot wounds to his head and body shortly after 1am, just metres from the home he shared with his girlfriend, Jenna Barry.

He was the unintended victim of a shooting meant for another man, who lived near him at Clonmore, Kilteragh.

The court heard that Dundon’s carelessness in describing the real target to gunman Barry Doyle was what caused the death of an innocent person.

Dundon (30) of Hyde Road in Limerick pleaded not guilty to the murder and went on trial last month at the Special Criminal Court.

The non-jury court is reserved for organised crime and terrorist offences; the DPP had deemed the ordinary courts inadequate to deal with the case.

Dundon had gone to the High Court and Supreme Court in an attempt to defer his trial until next year. He also went on hunger strike in protest at the failure to have his trial delayed.

He collapsed twice, both times as his trial was about to get underway. On the day after he was first found unconscious in June, he arrived in court half naked and in a wheelchair.

He fainted for a second time a month later, shortly after sacking his legal team and electing to represent himself. He later changed his mind about not needing lawyers.

He was not the only person involved in the case whose illness affected proceedings. Key prosecution witness April Collins was hospitalised in early July, causing a two-week adjournment.

Her sister, Lisa Collins, gave her evidence for the State days after having surgery for appendicitis. The Collins sisters both testified that they had received threats from Dundon, who is currently serving a sentence for threatening to kill April Collins.

She is the former partner of his brother, Gerard Dundon, with whom she has three children. Both in their late 20s, the Collins sisters each gave evidence of hearing Dundon planning to kill a man called John ‘Pitchfork’ McNamara, who lived near Shane Geoghegan. April Collins said she witnessed John

Dundon ordering gunman Barry Doyle to shoot McNamara less than 48 hours before the rugby player was killed. She said he informed Doyle that he had the car and the gun ready. The mother-of-four also said that, hours after the shooting, Dundon rang rival criminal Philip Collopy to boast that John McNamara was dead.

She said that he panicked when he learned that the wrong man had been shot. She agreed with Brendan Nix SC, defending, that she had been given a suspended sentence for intimidating a witness in another case, but denied that she had the sentence suspended by doing a deal with gardai.

“I dread these people,” she said at one stage. She agreed that she could have saved Mr Geoghegan’s life if she had taken two opportunities she had to report McNamara’s planned killing in the hours before the murder.

However, she said she would have been killed if she had said anything when stopped by gardai twice that night. Ms Collins agreed that she finally broke up with Gerard

Dundon in the spring of 2011 while he was in prison in Portlaoise, and that she thenbegan a relationship with rapist Thomas O’Neill.

Lisa Collins agreed with Mr Nix that she had been questioned by gardai about three different murders. However, she maintained that she did not know why. Her boyfriend, Christopher McCarthy, who is serving a sentence for extortion, also gave evidence against Dundon, his first cousin.

He said Dundon was “excited” when he arrived at his home on the night of the murder, telling him that “pitchfork” was dead. He and Lisa Collins have been guaranteed immunity from prosecution in relation to stealing the getaway car.

However, April Collins has not been granted any immunity. Dundon was brought back into court this morning amid tight security, with prison officers taking the unusual step of wearing stab vests into the courtroom.

Mr Nix made one last effort on behalf of his client, asking High Court President Nicholas Kearns to recuse himself due to his involvement in a 2007 case concerning Gerard Dundon.

The court rejected his suggestion as preposterous. Dundon listened to music on headphones while Justice Kearns delivered the verdict on behalf of the three-judge panel. He read the last 23 pages of their 84-page judgment, in which they said they treated the three main witnesses as accomplices, but found their evidence credible nonetheless.

The judges found April Collins’ evidence as ‘compelling’ and ‘graphic’. He said their testimony, which was corroborated by CCTV footage and mobile phone evidence, placed Dundon in a central role in the planning of the murder and pointed overwhelmingly to his guilt.

The court found him guilty of the murder and sentenced him to life in prison to date from today. Prosecutor Tom O’Connell said that Mr Geoghegan’s family, which was in court throughout the trial, did not wish to give a victim impact statement.

He said his mother, Mary Geoghegan, wished to say only that the facts of the case spoke for themselves. Chief Superintendent David Sheahan outlined some of Dundon’s previous convictions. These included threatening to burn down the home of a prison officer; the officer’s car was later found burnt outside his home.

Mr Nix said Dundon had asked him to say that he deeply regretted that Mr Geoghegan had died in the way he did and expressed his sympathy with the Geoghegan family. However, he said that his client maintained his innocence and hoped that some day the truth would come out.

Dundon’s solicitor, John Devane, later said that his client had worn headphones in court so he wouldn’t have to listen to the judgment, which Dundon believed was going to be a tissue of lies against him.

“He didn’t necessarily accept that and he didn’t want to hear it,” he said outside court. “He just wanted to keep himself to himself,” he continued. “He didn’t want to overreact to any adverse outcome and I think if wearing headphones achieved that result for him, then that’s ok.”

The Geoghegan family left the Criminal Courts of Justice without making any comment to the media.