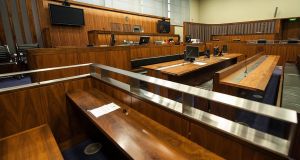 A Dublin man accused of IRA membership has been refused bail by the Special Criminal Court.

Kevin Braney was arrested last week by gardaí­investigating the activities of dissident republicans.

Mr Braney, with an address at Glenshane Crescent, Tallaght, Dublin 24 is charged with membership of an unlawful organisation styling itself the Irish Republican Army, otherwise Óglaigh na hÉireann, otherwise the IRA on August 2nd.

Gardaí had objected to the accused man’s bail application.

Another ground for objection, the court heard, was the detective’s fear that the accused man would interfere with witnesses.

The court also heard evidence from Detective Chief Superintendent Tom Maguire, who said that his objection was based on Section 2A of the Bail Act.

The section allows a Chief Superintendent give evidence that the refusal of bail is necessary to prevent the commission of a serious offence.

Mr Justice Tony Hunt, presiding, sitting with Judge Patricia Ryan and Judge Gerard Haughton, said the court was satisfied that the possibility of Mr Braney interfering with prospective witnesses in the case was a “very live and real concern”.

“On that ground alone,” the judge said, “the court is disposed to refuse bail.”

Referring to the chief superintendent’s objection, that a further serious offence may be committed, Mr Justice Hunt said that, in this instance, possible interference with witnesses was also a “significant and real concern”.

The judge said that the court had “no hesitation” in refusing bail.

He told Mr Braney’s counsel, Tony McGillicuddy BL, that he has to right to reply elsewhere.

Mr Braney was remanded in custody until October 5th, when his case is listed for mention again.

Mr McGillicuddy had asked if the appearance could be via videolink from Portlaise prison, rather than in person.

Mr Justice Hunt said that although a video-link system had been put into the court, it was a “shambles”, so the accused man would have to appear in person.

He was remanded in custody until August 31st, when his case is listed for mention, and a bail application is expected to be opened.

1 Covid-19: Travel restrictions to stay and 'green list' put on hold amid fears of second wave
2 Taoiseach ‘disappointed’ he only learned of Barry Cowen’s driving ban on Friday
3 ‘Unseasonably’ windy weather set to buffet Ireland
4 ‘Only a civil servant’ could have come up with ‘unenforceable’ pub regulations
5 Bobby Storey: The IRA's planner and enforcer who stayed in the shadows
Real news has value SUBSCRIBE