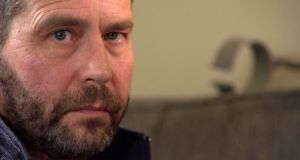 Kevin Lunney was abducted from outside his Co Fermanagh home and assaulted before being dumped on a road in Co Cavan last September. Photograph: BBC Spotlight

A defence solicitor for two of the four men charged with the abduction and false imprisonment of Quinn Industrial Holdings director Kevin Lunney has criticised the length of time it is taking for a file to be sent to the Director of Public Prosecutions.

Solicitor Alan Gannon said that his clients, who were in custody since November, were entitled to a presumption of innocence and the State cannot just keeping remanding the defendants in custody on a rolling basis while waiting for a file to be prepared for the DPP.

Mr Gannon urged Judge Deirdre Gearty at Harristown District Court in Roscommon on Friday morning to refuse jurisdiction in the case. He said that it was clear from the serious allegations that the matter would not be heard at District Court level and that refusing jurisdiction would “put pressure” on the DPP to proceed with the case.

A third defendant, who cannot be identified for legal reasons, also refused consent with his barrister Pat O’Sullivan stating that his client wanted the matter to move on.

Kieran Madigan, State solicitor for Roscommon, told Judge Gearty the investigation was “complex” and that significant progress had been made by gardai investigating the abduction and false imprisonment of Mr Lunney in Cavan in September.

Mr Madigan said gardaí were confident that a file would be sent to the DPP by next Friday, January 31st.