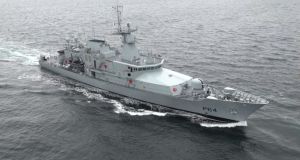 The skipper of a French-registered trawler is scheduled to appear in court in West Cork on Friday after his vessel was detained by the Naval Service for an alleged breach of fishing regulations.

The trawler was ordered to lift her lines and was escorted to Castletownbere in West Cork, where she arrived early on Wednesday morning and moored at the quayside.

The authorities then obtained a 48-hour detention order in respect of the trawler, and the skipper is expected to appear at Bandon District Court on Friday at 10.30am to answer the charges.

The 32-metre Miss Jacqueline II is Spanish-owned and fishes out of La Coruna in Galicia, northern Spain, even though it is registered in Bayonne in southwest France.

The steel-hulled vessel was built in St Malo in Brittany in 1962 but was bought by Spanish owners in 1997 and converted for use as a long liner to fish for hake.

According to the Defence Forces Press Office, Sunday’s detention of the French-registered trawler is the fourth such detention by Naval Service fishery patrol vessels this year.