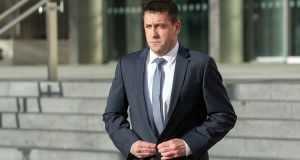 His case was struck out at Dublin District Court on Friday where he had already indicated that he was contesting the charge.

The prosecution sought an adjournment pending a challenge to a High Court ruling in an action brought by a Romanian national living in Dublin which found that alcohol breath tests must be supplied in English and Irish.

However, the defence opposed the application for any delay in Mr Connell’s case.

Judge Brennan said the defendant was ready to meet the case but it was not ready proceed and in light of the challenge “and this is a summary court, I will strike it out”.

The school teacher, who regularly appears on an expert panel on Sky Sports and writes GAA analysis pieces for newspapers, was arrested on suspicion of drink-driving in Dublin.

The 41-year-old, with an address at Bealing Grove, Tyrellstown, Dublin 15, was accused of driving over the legal limit at the Finglas Road, on September 21st, 2015. The offence is under the Road Traffic Act and can carry a fine, jail sentence as well as a road ban.

The alleged incident was a day after Dublin’s victory over Kerry in the All-Ireland football final.

Afterwards, the former Dublin forward was brought to Store Street Garda Station in the city centre. He had then been charged and bailed to appear at Dublin District Court on October 5th.

When the case was called on Friday, Connell sat silently on the defendant’s bench. Garda Daniel Rafter told Judge Brennan he was seeking an adjournment pending the Supreme Court appeal.

Opposing a delay in the case, defence solicitor Jonathan Antoniotti asked for a strike out.

“In the circumstances where the defendant is here to meet his case and the State is not in a position to proceed, in light of the Romanian decision and this is a summary court, I will strike it out,” said Judge Brennan.

In September, the High Court made a ruling which put hundreds of suspected drink-driving cases in doubt by stating alcohol breath tests must be supplied in English and Irish. The DPP is challenging that ruling in the Supreme Court.

The issue arose earlier this year during a prosecution of Dublin resident Mihai Avadenei (29), from Lioscian, Swords, for an alleged drink-driving offence.

His lawyers argued he should have been given a read-out of his breath test in both languages.