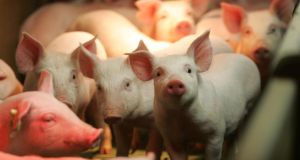 A pig farmer has been jailed after a judge labelled him “an absolute disgrace” for failing to prevent an environmental time bomb from threatening lakes in the midlands.

Donal Connaughton (55) had acted “in a blackguardly fashion” and now expected the authorities to clean up the environmental nightmare he had created at the pig farm in Co Longford, said Judge Séamus Hughes.

Connaughton, of Elfleet, Newtowncashel, was convicted at Longford District Court of causing or permitting effluent to fall from massive tanks, containing four million gallons of slurry, at the pig farm into a local lake in March of last year.

The prosecution was taken by Inland Fisheries Ireland and Judge Hughes jailed him for 10 weeks and fined him €3,000 with €5,400 costs.

Up to 25 tanks – located over and under ground – are located at the pig farm which covers 8,000sq m. Many of the tanks were unauthorised structures and Connaughton had exacerbated the situation by only removing the roofs in order to comply with a demolition order previously granted to Longford Co Council, the court heard.

This had caused the slurry and soiled water to overflow from the yard into local water courses.

The court was told that, despite the best efforts of a task force led by Longford County Council and including the Departments of the Environment and Agriculture, the IFA and the Environmental Protection Agency, the discharge was continuing to flow from the farm.

Senior council engineer Tom Murtagh said that up to 10 people were now working at the site and, to date, a quarter of a million of gallons of matter had been removed from the tanks. Funding for the cost of work to date of €50,000 had been provided by the Department of the Environment.

However the department had provided the funding on the basis of the principle that the polluter paid, Mr Murtagh told Judge Hughes. The expenditure would have to be recouped, he said.

Defence solicitor Mark Connellan said Connaughton had acknowledged that he had caused the pollution problem at his farm. But it was “beyond his control” to deal with it as he was no longer in business there.

He had no resources whatever, was living on social welfare and there were first and second charges on the property.

In evidence, Connaughton said that he had spoken to up to 20 local farmers about the possibility of taking the slurry, but none of them wanted to get involved because of the ongoing “litigation”.

Judge Hughes noted that he had put the authorities in the invidious position of having to take responsibility for a problem he had created.

“This is the worst case I have come across in terms of public mean-spiritedness. There is a meanness in Mr Connaughton and words can’t describe his attitude to people who have to manage the environment.

“He has created a monster that he’s now walking away from. I detect a satisfaction in him over this. He’ll take no responsibility. You’re an absolute disgrace”, he said, addressing Connaughton. Convicting the farmer, Judge Hughes joined with Mr Murtagh in thanking the people of the area and the various authorities for their co-operation in the matter.