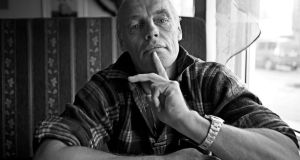 Imre Arakas has been charged with conspiring to kill a long-time friend of the Hutch family.

An Estonian man has been charged with conspiring to kill a long-time friend of the Hutch family.

Gardaí from the Drugs and Organised Crime Bureau supported by members of the Special Crime Task Force, Emergency Response Unit and Armed Support Unit raided a premises in west Dublin on Tuesday shortly before 11am.

Three men were arrested as part of an investigation into the Hutch-Kinahan feud.

Imre Arakas (58), with an address at Sopruse, Tallinn, Estonia, was charged on Thursday afternoon and brought to appear before Judge Grainne Malone at Dublin District Court.

He is accused of conspiring with others not before the courts to murder James Gately in Northern Ireland between April 3rd and April 4th last. The offence is under Section 71 of the Criminal Justice Act 2006.

He was brought to the Criminal Courts Justice building by armed gardaí and appeared before Judge Malone at about 5pm on Thursday.

Det Garda Alan Monahan told the court the defendant had good English and did not require an interpreter. The judge asked him whether he had a solicitor, to which Mr Arakas replied, “No, I do not.”

Det Garda Monahan said while Mr Arakas was detained he was “offered a solicitor on numerous occasions, but decided not to use one”.

Evidence of his arrest and charge was then given. Det Garda Monahan said the accused was charged at 1.31pm at Blanchardstown Garda station on Thursday, after which “he made no reply to the charge” and was handed a copy of the charge sheet.

There was a Garda application to remand Mr Arakas in custody.

Judge Malone asked Mr Arakas whether he was working, and he replied “at the moment unemployed”.

Judge Malone repeated that he was entitled to a solicitor under the legal aid scheme and told him that the Garda application was for him to be remanded in custody.

Mr Arakas, who was wearing a blue T-shirt with a US Air Force logo, dark navy jeans and black runners, was asked whether he wanted to nominate a solicitor.

The accused, who had a large bandage on his left arm, stood and answered: “Yes, I wish because I am pretty new, I don’t know the law,” at which point Judge Malone put the case back to second calling to allow him consult with a solicitor in court.

No requirement on objections

The case resumed a few minutes later when Judge Malone heard that due to the nature of the charge, a bail application could only be made in the High Court. She noted there was no requirement on her to hear the Garda objections to bail.

Mr Arakas was remanded in custody to at appear again at the District Court next Wednesday. An application for legal aid was granted due to the seriousness of the charge and because he would not be able to afford a lawyer.

The two other men arrested in connection with the investigation have been released from Garda custody without charge.

A file is being prepared for the Director of Public Prosecutions.