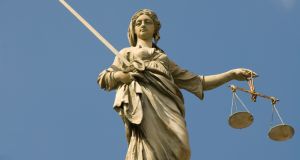 The man was charged with seven offences relating to seizures of drugs, totalling over €3,000 in value

A 48-year-old man who was arrested by gardaí after suffering a minor gunshot wound at a garda checkpoint in Co Cork has been charged with a number of drug offences.

Keith Donovan was charged with seven offences relating to seizures of drugs, totalling over €3,000 in value, when he appeared at a special sitting of Mallow District Court on Sunday.

Mr Donovan was also charged with possession of the prescription sleeping medication Zopiclone and possession of Zopiclone for sale or supply at Monataggart, Donoughmore, Co Cork, on May 22nd.

He also was also charged with two further offences of possessing the prescription opiate Methadone and possessing Methadone for sale or supply, also at Monataggart, on May 22nd.

Insp Tony Sullivan told the court that gardaí had no objection to bail for Mr Donovan with conditions attached.

Det Garda Leahy said gardaí were asking Mr Donovan, a native of Gurranebraher in Cork city but now resident at Monataggart, Donoughmore, to reside at that address and abide by a 9pm to 8am curfew.

He said gardaí were asking Mr Donovan to be contactable at all times and to surrender his passport. They requested that he signs on three times a week at Gurranebraher Garda station once Covid-19 restrictions are relaxed or lifted.

Gardaí were also seeking him to have no contact with his co-accused, Stephen Murphy (35) from Passage West, who was charged with two offences relating to possession of cocaine in Mallow, Co Cork.

Judge Patricia Harney warned Mr Donovan that this last condition meant any contact with Mr Murphy via social media would see him forfeit his bail and be taken into custody.

Defence solicitor Diarmuid Kelleher said that his client was willing to abide by all conditions. Insp Sullivan said gardaí were seeking a month’s adjournment to Mallow District Court on June 23rd for the DPP’s directions.

Judge Harney granted the State application, which Mr Kelleher said was agreeable to his client.

Gardaí did not object to bail for Mr Murphy but among the bail conditions sought by Det Garda Liam Finn of the Cork City Divisional Drugs Squad was that he would have no contact, directly or indirectly, with Keith Donovan.

Judge Colm Roberts granted bail to Mr Murphy, who also agreed to reside with his uncle at Ardmore Estate, Passage West and keep a curfew there, and he remanded him to appear again at Cork District Court on June 17th.