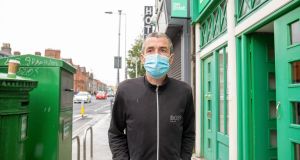 A man has appeared in court charged in connection with the vandalism of a statue of Luke Kelly in Dublin.

Michael Dunne (47) from Sophia Housing, Sean MacDermott Street in Dublin, was arrested and charged at Store Street Garda station with one count under the Criminal Damage Act.

Mr Dunne is alleged to have sprayed the statue of the former Dubliners’ singer in Guild Street with blue paint on Sunday evening at 4.45pm.

Garda David Kelly of Store Street Garda Station told the Dublin District Court that CCTV footage of the incident matched CCTV footage taken near Mr Dunne’s home which showed him wearing the same clothing as he entered his home.

A later search of Mr Dunne’s home uncovered clothes which matched those seen on the CCTV footage, Garda Kelly added. Garda Kelly said the CCTV was of very good quality.

Mr Dunne was arrested in the vicinity of Sheriff Street at 12.33pm on Monday.

Garda Kelly opposed the grant of bail to Mr Dunne. He said a file on the matter was being prepared by the Director of Public Prosecutions.

Mr Dunne’s defence solicitor Jenny McKeever said her client would argue that the clothes he was wearing did not match the clothes of the suspect on the CCTV footage and he was denying the charge of criminal damage. She said it was “not a clear cut case”.

Mr Dunne swore an undertaking to abide by any bail conditions issued by the judge.

Judge Anne Ryan granted Mr Dunne bail. She said the offence was a “minor offence as an offence in itself” and not sufficient to deny him bail.

Mr Dunne was granted bail in his own bond of €200. He was ordered to stay out of the Sherriff Street area and away from both Luke Kelly statues in Dublin city centre, the other one being in South King Street near St Stephen’s Green.

He must be of “sober habits and good behaviour in public” and sign on at Store Street Garda stations on Monday, Wednesday and Fridays.

The case was adjourned until September 8th at Dublin District Court.