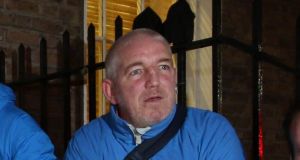 Love/Hate actor Stephen Clinch, who has been charged in relation to a €50,000 armed robbery at a hotel in Dublin city centre, has been further held in custody.

Stephen Clinch (49), who was cast as recurring character “Noely” in the hit RTÉ series, had with his co-defendant Hugh McWeeney been remanded in prison last month.

Dublin District Court had heard a loaded 9mm semi-automatic pistol was allegedly put to the head of a security worker collecting cash, and it was claimed Mr Clinch later pointed the gun at another employee who gave chase.

Mr Clinch, with an address at Millbrook Grove, Kilbarrack, Dublin and Mr McWeeney (43), of Main Street, Belmayne, Malahide Road, Dublin 17, are charged with robbery of €50,730 and possessing a firearm with intent to use it in a robbery at the Gate Hotel on Parnell Street on the morning of May 11th.

Mr Clinch appeared at Cloverhill District Court on Wednesday before Judge Victor Blake and was further remanded in custody.

He will appear again on June 17th next when his co-defendant will also be before the court.

Besides Love/Hate, Mr Clinch also appeared in Darndale: The Edge of Town, a TV3 documentary series about life in the north Dublin suburb.