Stephen Clinch appeared in court following his arrest on Monday 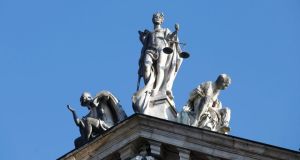 Love/Hate actor Stephen Clinch (48) appeared at Dublin District Court following his arrest in connection with a raid at city-centre hotel on Monday morning.

An actor who starred in Love/Hate has appeared in court charged over a €50,000 armed robbery in Dublin.

Stephen Clinch (48) appeared at Dublin District Court following his arrest in connection with a raid at city-centre hotel on Monday morning.

Mr Clinch, who was cast as recurring character “Noely” in the hit series, and his co-accused Hugh McWeeney (43) were brought before Judge Anthony Halpin charged with robbery of €50,750 and possessing a firearm with intent to use in a robbery at the Gate Hotel on Parnell Street.

Mr Clinch, with an address at Millbrook Grove, Kilbarrack, Dublin will face a bail hearing later this evening.

Garda Niall McCormack, of Store Street Station, told the court that Mr Clinch made no reply when the charges were put to him. The actor remained seated as Garda McCormack said he intended to object to bail.

Defence solicitor Jenny McGeever confirmed in court that bail was being sought and she added that four witnesses will be called. The case resumes this evening.

Gda Denise Bowes told the court that the co-defendant, Mr McWeeney, had no reply when the charges were put to him at Store Street station in the early hours of Wednesday morning.

Mr McWeeney, from Main St, Belmayne, Malahide Rd, Dublin 17, did not address the court. His solicitor Noelle Kenny said he was not applying for bail.

Legal aid was granted after the court heard Mr McWeeney is in receipt of social welfare.

A file is also being prepared for the DPP, the court was told.

In his fictional role in Love/Hate, Mr Clinch was infamously involved in a prison incident using a pool cue to attack Fran in the series finale. He also appeared in Darndale: The Edge of Town, a TV3 documentary series about life in the north Dublin suburb.