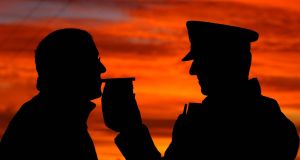 A 50-year-old man from an “impeccable” family was at an “almost fatal” level of alcohol when stopped while driving in Co Kerry, a court has heard.

John Joe O’Reilly of Main Street, Kilgarvan, was driving “erratically” when he was apprehended by a Garda patrol car at Killowen on September 19th, Kenmare District Court was told.

At Kenmare Garda station, he was found to have a reading of 109 microgrammes of alcohol per 100ml of breath - a level described as “astonishing” by Judge David Waters. The legal limit for an experienced driver is 22mg per 100ml.

The court heard O’Reilly had been arrested three days earlier at Greenane on suspicion of drink driving. He was taken to Kenmare Garda station where he attempted but failed to provide a specimen.

He had previously been stopped at a morning checkpoint on February 4th, at Minish, Killarney and was later found to have a reading of 68mg of alcohol per 100ml of breath.

The court heard that 19 days later, on February 23rd, gardaí responded to a report of a long line of cars, of between 15 and 20 vehicles travelling “very slowly” near Caher, on the main Kenmare to Kilgarvan Road at about 3.10pm. They observed how the vehicle in front was being driven in the middle of the road and holding up cars behind it.

Gardaí stopped the car and found O’Reilly, who the court heard was clearly drunk, behind the wheel.

“He collided with a vehicle from Cork causing it to overturn,” Sgt Kieran O’Connell told the court. No injuries were sustained by the driver of either vehicle.

However, O’Reilly left the scene “and headed back” towards Kilgarvan, Sgt O’Connell said. “He was detected immediately - within an hour,” he said.

O’Reilly pleaded guilty to the four drink driving charges and a fifth charge of leaving the scene of a crash.

He had a previous conviction for driving without insurance in 2018, the court was told.

Solicitor Padraig O’Connell handed medical and other reports to the judge, including from Cuan Mhuire, Bruree, where O’Reilly has been receiving treatment for alcohol addiction.

“He is from an impeccable background. The family are doyennes of Kilgarvan and are very highly thought of. He went on a self-destructive course for a period,” Mr O’Connell said.

He said his client’s 90-year-old mother depended on him and he had lost his brother in recent days.

Judge Waters said he had sympathy for O’Reilly on his alcoholism but that sympathy vanished when he visited the alcoholism on members of the public.

His client had pleaded to all counts, he said, and Sergeant O’Connell added that O’Reilly had paid the fixed charge notice on the hit and run.

“He needs to continue with his treatment,” Judge Waters said, remanding O’Reilly on bail for preparation of a probation report to April 3rd next at Kenmare District Court.