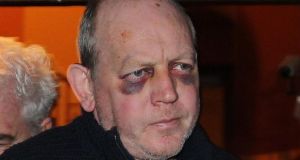 A file photograph of Republican Pearse McAuley who has been in remanded in custody for a further two weeks after appearing in court in Co Roscommon.

Republican Pearse McAuley has been in remanded in custody for a further two weeks after appearing in court in Co Roscommon.

Mr McAuley (50) is facing four charges, including threatening to kill or cause serious harm to his wife, Pauline Tully McAuley at Keelderry, Kilnaleck, Co Cavan on Christmas Eve.

He is also charged with assaulting Ms Tully McAuley causing her harm on the same occasion.

On December 26th he was remanded in custody to Castlerea Prison following his initial court appearance in Co Cavan.

Wearing a blue jacket over an open-neck shirt, he still bore marks of apparent bruising under both eyes, which had been evident at his appearance in Cavan District Court a week earlier.

Solicitor Alan Gannon told the court that he was acting as agent in the case for solicitors Eirinn McKiernan and Company.

Mr Gannon held a brief consultation with his client as he stood in the holding area of the court.

The court was told that the defence was consenting to the application.

Mr Gannon had a further brief consultation with the accused man before he was led away. The hearing lasted less than a minute.