Judge dismisses cases about not producing driving licence in court 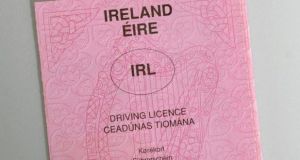 A judge has dismissed 21 cases relating to failure to produce a driving licence in court.

It is an offence for individuals convicted of road traffic offences not to produce their licence in court for the application of penalty points or the enforcement of disqualifications.

Some 21 cases in relation to the offence – the first to date – came before Judge Marie Keane in Dublin District Court on Thursday.

They related to the application of penalty points for speeding and driving with a mobile phone.

Junior Counsel Oisin Clarke, appearing for a number of defendants, submitted to Judge Keane that the cases be dismissed on the basis that defendants were not aware of the offence and were not directed by the court to present their licences.

“All the defendants I represent brought their licences to court but were not directed to present it,” said Mr Clarke.

“It appears in respect of section 22 that the court needs to make a formal demand in respect of at least a copy of it. If that hasn’t been done, obviously the person is going to walk out of court with their licence.

“The lay person has to bring the licence to court but my submission is that in the absence of the court telling them to present it, it is simply unfair for that person to be subsequently penalised because they haven’t been asked for the licence.”

Mr Clarke added it would be unfair to expect a lay person to understand the workings of the court, and particularly unfair to convict them of a separate criminal offence of which they were unaware.

Minister for Transport Paschal Donohoe has admitted in private correspondence it is “frequently impossible” to enforce road safety laws as offenders are not being compelled to produce their licences.

Figures from the Courts Service show 89 per cent of disqualified drivers’ licence details were not recorded in court between January 2013 and March 2015. In addition, 96 per cent did not surrender their licence.

Liz Byrne, a prosecuting solicitor at the Office of the Director of Public Prosecutions, said she “accepted” the non-indication on the summons in relation to presenting the licence.

“I accept that at the bottom of the summons it says the person is required to bring the licence to court,” she said. “I accept it doesn’t warn the person that it’s an offence not to present it.”

Mr Clarke said the issue “has come to the fore due to a large amount of media attention in the last couple of months” but that that was “neither here nor there”.

“It’s very difficult – impossible — to conclude they have committed a criminal offence,” he said.

Dismissing the cases, Judge Keane said the legislation was “very complex” and that she was “none the wiser” as to the nature of it having heard it outlined by the legislator in Dail Eireann.

“It’s a very serious offence to come to court in relation to any matter that requires penalty points,” she said. “The whole penalty points system is one that has drawn an awful lot of attention and rightly so because it is necessary for maintaining road traffic legislation.

“However, a person who comes before the court is entitled to know precisely what they are charged with and the outcome of any successful prosecution. “The fact that a conviction for failing to bring your licence to court carries such a significant penalty, I am obliged to dismiss the summonses.

“While I haven’t heard any evidence from any individual that they weren’t asked [to present the licence], I will rule on the balance of probabilities that it was not clear to them that they were to produce their licenses when they were before the court.”