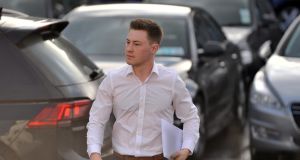 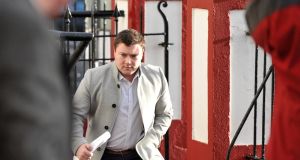 Two sons of Kerry TD Michael Healy Rae and their friend have been given suspended prison sentences for assaulting a visitor to Kenmare during the 2017 Christmas period.

The 24-year-old, who was elected to Kerry County Council last May and works as parliamentary assistant to his father, also denied assaulting Mr James at East Park Lane in the town on the same date.

Their friend Malachy Scannell (34), of Inchinacoosh, Kilgarvan, was also charged with assaulting Mr James (30) on the same date. He also denied the charge.

The incident happened after Kevin Healy Rae was accused of skipping a long queue at a chip van which Mr James, whose mother is from Kilgarvan, and his partner Lauren were standing in. The couple took issue with Kevin Healy Rae “barging” to the top of the queue and placing an order.

‘This is my town’

In response to being told there was a queue, he replied: “This is my town, this is my chip van”.

Kevin Healy Rae came back to the chip van soon after with Jackie Healy Rae and Scannell. Jackie Healy Rae held Mr James in a headlock, which he said stopped him from breating, until friends of the English man pleaded that he be let go. The court heard that moments later the Healy Raes and Scannell “charged” up the town’s Main Street in pursuit of Mr James, who then received multiple blows. The court heard the beating left his face almost unrecognisable with his nose swollen and pushed to one side.

Mr James was taken by ambulance from the scene and was found to have sustained a broken nose, a chipped tooth and a shoulder ligament injury.

He described Jackie Healy Rae as “an enforcer” on the night and said the main reason they were not being jailed was because they had no previous convictions.

In a victim impact statement, handed into Judge Waters and accepted by defence solicitor and his clients, though not read out in court, Mr James said his life had changed “to the detriment” as a result of the assault.

He said his wedding had since taken place in Kenmare, a town he once loved, but the occasion was “marred” for him and his wife by their memories of the attack.

Mr James said he had to endure painful operations to repair his nose and will need surgery again in the future. A surgeon told him his nose may never be back to normal. He also has a scar on his forehead linked to the beating.

“Immediately following the assault, I struggled to sleep at night as mynow wife and I had recurring nightmares of the events. We still have intermittent nightmares now,” he said.

Mr James said he used to look forward to visiting Kenmare with his family but “the events that night have changed all that now and I no longer want to visit... as I no longer feel safe and I associate it with being attacked”.

He said he was self-employed and suffered a “significant financial loss” as a consequence of the injuries as he had to take time off work to recover and for the trial and also cover his medical costs.