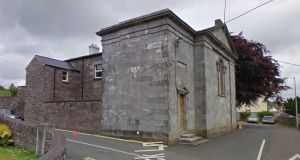 A 40-year-old Scottish businessman who had to be restrained by gardaí when he tried to escape from court earlier this week has been further remanded in custody after he was charged with assaulting and resisting a garda.

James McCarney, with an address at Branzeit, Balmore, Glasgow, made his third court appearance in the space of four days when he was brought before Bandon District Court in West Cork on Friday, where he was charged with two offences arising out of his previous court appearance.

Sgt Michael Kelleher gave evidence of arrest, charge and caution in relation to both charges and told Judge Mary Dorgan at Bandon District Court that Mr McCarney replied “I’m very sorry” to both charges when they were put to him after caution.

The two charges arose as result of Mr McCarney leaping from the custody area and trying to escape out the door of Macroom courthouse, only to be confronted by a number of gardaí, including Garda O’Donoghue, who was shoved to the ground as he tried to restrain Mr McCarney.

Mr McCarney had been brought to Macroom District Court on two earlier charges of dangerous driving and driving without insurance at Toureen, Ballinhassig, on February 6th, after he had been arrested following a 5km pursuit by gardaí when he took off from a checkpoint.

On Friday at Bandon District Court, Mr McCarney’s solicitor Eamon Fleming confirmed his client was pleading guilty to all four charges as he was anxious to have the cases disposed of as quickly as possible and he hoped to have all matters finalised.

In the circumstances, Insp Meany said he was seeking a short remand in custody, but Mr Fleming said his client was applying for bail and he thought it most unfair to deprive his client of his liberty when he was willing to plead guilty to the offences and dispose of them promptly.

He said his client, who imported furniture into Ireland, was willing to surrender his passport, reside at an address in Rossmore near Clonakilty where had a 12-month lease on a property with his partner, and sign on twice daily at Clonakilty Garda station in order to obtain bail.

He pointed out that gardaí had impounded Mr McCarney’s 2007 Mercedes, which was conservatively valued at €5,000, so they also had security. He further noted Mr McCarney had apologised for his actions in Macroom courthouse.

Insp Meany said gardaí were vehemently opposed to Mr McCarney getting bail, as he reminded Judge Dorgan he had made desperate efforts to avoid capture or to escape custody at Ballinhassig and Macroom, and gardaí feared he would not stand trial if not remanded in custody.

Insp Meany said he would expect that if the court were to grant a short remand in custody of a week, gardaí would obtain the DPP’s instruction and be in a position to proceed with the case against Mr McCarney on all four charges next Friday.

Judge Dorgan noted that Mr McCarney had fled the checkpoint and driven for some 5km with two Garda cars in pursuit, with other Garda cars also tasked to intercept him, while she herself had witnessed his attempt to escape Macroom courthouse on Wednesday.

She refused him bail and remanded him in custody to Bandon District Court on February 16th, but indicated she would allow Mr Fleming to make a fresh application for bail if the State had not received the DPP’s directions and was unable to proceed next Friday.

Mr Fleming had earlier told the court his client’s mother had told him her son suffers from a bipolar condition but is in denial about it, and he asked that he receive appropriate attention while on remand in prison. Judge Dorgan ordered he receive all appropriate medical attention.

Leo Varadkar: We are not ready for one metre social distancing 11:48
Garda to operate scaled down Covid operation for June bank holiday 11:01
Have your say: Is ‘remote learning’ sustainable for your family? 10:42
Bank holiday weekend set for temperatures of 25 degrees 09:28
Girl (5) rescued after lilo drifted to sea in ‘good health’ 08:53

1 Twitter accuses Trump of ‘glorifying violence’ after Minnesota ‘shooting’ tweet
2 Coronavirus: HSE experts support the early reopening of schools
3 Garda to operate scaled down Covid operation for June bank holiday
4 Quarantine may be lifted for arrivals into Ireland from countries with low Covid-19 cases
5 What exactly will happen in phase two of easing restrictions?
Real news has value SUBSCRIBE