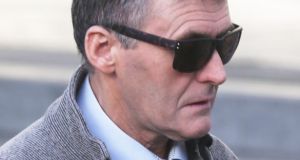 Dessie O’Hare was on Monday given the date of December 14th for his appeal hearing. File photograph: Collins Courts

Former INLA man Dessie O’Hare is to appeal his sentence for falsely imprisoning a family in south Dublin.

O’Hare, who was known as ‘The Border Fox’, was jailed by the Special Criminal Court for seven years last year for the crime he committed while evicting the family from their home.

His attack on another man on the same occasion was described as “disturbingly violent”, with Mr Justice Tony Hunt remarking that the violent side of O’Hare’s personality was not in remission and that his threat to society had “not completely abated”.

He was jailed for three years for assaulting Mr Roche and ten years with three suspended for the rest of his life for falsely imprisoning Mr Byrne. The sentences are running concurrently.

O’Hare has lodged an appeal against sentence to the Court of Appeal, and was on Monday given the date of December 14th for his hearing.

His barrister, Mark Lynam BL, said his client wanted to be present on that date.

In 1988, O’Hare was sentenced to 40 years imprisonment for falsely imprisoning and assaulting Dublin dentist Dr John O’Grady, causing him grievous bodily harm, but was released under the terms of the Good Friday Agreement in 2006.