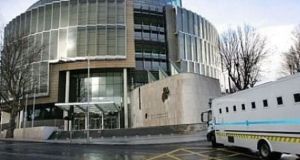 A man who plotted to assassinate Dubliner Gary Hanley has been jailed by the Special Criminal Court for six years. File photograph: The Irish Times

A man who plotted to assassinate Dubliner Gary Hanley has been jailed by the Special Criminal Court for six years.

Sentencing Dean Howe at the non-jury court on Tuesday, Mr Justice Tony Hunt said the defendant’s activities had placed him in a supervisory role as part of this “elaborate plan”.

“He was a conduit of order from on high and forcefully encouraged the activities of those lower down the chain of command,” said the judge, who aded that Howe’s contribution was “essential, high level and intentional”.

Howe (34), with an address at Oakfield, Dublin 8, pleaded guilty last December to conspiring with others to murder Mr Hanley at a location within the State between September 15th and November 6th, 2017.

He is the fourth man to be jailed for his role in conspiracy to murder Mr Hanley. Luke Wilson (24), from Cremona Road in Ballyfermot, Dublin; Alan Wilson (39) of New Street Gardens, Dublin 8; and Joseph Kelly (35) of Kilworth Road, Drimnagh, Dublin 12, all previously pleaded guilty to conspiring to murder Mr Hanley.

Luke Wilson, who also pleaded guilty to unlawful possession of a Beretta, was jailed for 11 years; Alan Wilson was given six years and Kelly, who also admitted a weapons charge, was jailed for 12 years. Liam Brannigan has also been convicted for his role in the conspiracy to murder and is due to be sentenced on March 23rd.

Howe was involved in carrying out surveillance on Mr Hanley; supervising the use of several cars by him and his co-conspirators; collecting fuel; and giving instructions to the getaway driver Joseph Kelly.

The three-judge court has heard that Howe had scolded Joseph Kelly during the operation, telling him he had “fucked up” and asked “what are you getting paid for?”

“We all have our jobs to do,” he told Kelly, but “we had to do your job”. These recordings were secretly captured by gardai in the bugged car.

Howe was also observed by gardai with two other men in the Phoenix Park at the same time tracking devices “pinged” in the park, two days before the devices were discovered on Mr Hanley’s car.

Mr Justice Hunt said Howe had been a regular participant in the recognisance journeys as well as the planning for the proposed attack.

He said Howe’s activities were “recurrent and frequent”, he was fully acquainted with the purposes of the organisation and his knowledge and intention were present at all times.

“He contributed actively to the conspiracy but this active contribution ceased five hours before the murder was to take place and we are in no doubt that he remained part of the conspiracy right to the end,” he noted.

There was no doubt that Howe had received and passed on instructions from those further up the chain on command, said the judge, who added that he was satisfied Howe was not at the top of the pyramid but had been intimately and frequently involved in the plot.

The judge said his hands were tied by the existence of a statutory maximum of 10 years for conspiracy to murder while other gang members had received higher sentences for firearms offences. Having regard to the gravity of the offence, the judge said the headline sentence was eight years and six months in prison.

Although there was a strong factual case against the accused man, his early plea of guilty was of benefit to the court, he said. In mitigation, he noted the “low-level” nature of Howe’s previous convictions.

1 Aaron Brady, the man who said with pride he was a cop killer
2 Aaron Brady found guilty of capital murder of Det Garda Adrian Donohoe
3 A chronicle of dignity and despair
4 A year after Nóra Quoirin’s body was found, her parents still believe she was abducted
5 State to investigate claims of bogus employment practices in meat sector
Real news has value SUBSCRIBE