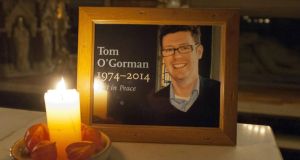 The jury in the trial of Italian man Saverio Bellante, who admitted killing his landlord Tom O’Gorman found him not guilty of murder by reason of insanity. Photograph: Collins 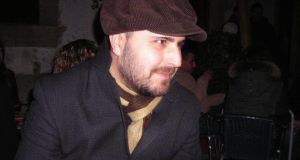 Saverio Bellante told gardaí ‘I am guilty’ when charged with killing Tom O’Gorman at house in Castleknock.

The sister of Dublin man Tom O’Gorman, who was killed by his tenant in Castleknock last year, has told a court that her brother was “the least violent man one could imagine” but ultimately he faced “appalling violence”.

Last month the jury in the trial of Italian man Saverio Bellante, who admitted killing his landlord Tom O’Gorman and eating his body parts, found him not guilty of murder by reason of insanity.

Saverio Bellante (36) with an address at Beech Park Avenue, Castleknock, Dublin 15 was charged with murdering Thomas O’Gorman at an unknown time between January 11th, 2014, and January 12th, 2014 at the above address.

The jury of seven men and five women spent one hour and 36 minutes deliberating on July 31st before bringing in a verdict of not guilty of murder by reason of insanity.

Catherine O’Gorman, sister of Tom O’Gorman, told the court on Wednesday that since the death of her brother Tom, she and her other brother Paul O’Gorman have felt “absolute devastation”.

She said that while the 39-year-old was described during the trial as a victim of crime, this is not how she remembers him.

She told the court that that the greatest injustice, which no court of law can ever address, was the “unnecessary fact of Tom’s death”.

Ms O’Gorman said that for the benefit of the jury they have heard in great detail the acts of violence committed upon Tom, for his loved ones however they can only think about whether he suffered, whether he was afraid, what he experienced.

“The last year and a half have been unimaginably painful. While we are grateful to the court for giving us the opportunity to make this statement, it is impossible to adequately articulate how this has impacted our lives,” she read.

Ms O’Gorman said that while the focus of the court has been to examine the actions and state of the mind of Mr Bellante, for them the most enduring experience since January 12th, 2014, could only ever be the “unending loss” of their brother.

“For us he was our big brother. He was funny. He was interested and excited by life. He was gentle , with an honesty that made him vulnerable. He was passionate about his faith and also deeply empathetic, intellectually curious and always open to dialogue. He was social and enjoyed exchanging ideas with other people. He was a talker. Tom also had a keen interest in a variety of sports. Tom would have been already anticipating with great excitement the upcoming Rugby World Cup,” she said.

The court heard how as siblings they had been through a lot in recent years including the death of their mother at the end of 2012 but they were always close. Ms O’Gorman said her brother was also “unfailingly loyal” to his family and friends.

Ms O’Gorman said Tom had a “newfound optimism” before he died in January 2014 and spoke of ideas to continue his academic research by pursuing a PhD and possibly moving to America.

“This seemed purposeful and positive and further heightens the unspeakable tragedy that Tom will never live these plans, he will never have his own children nor fulfil his own future,” she read.

His sister said it is important to them that Tom is not remembered for how he died but for how he lived and for the “warm and beautiful” person he was.

“The trial is the only thing that will conclude with any finality today – for Paul and me our loss and heartbreak continue.”

She concluded by saying as a family they can only hope that the Irish State will do everything in its power to ensure that such tragedy never happens again and “at the very least with regard to taking responsibility for the future actions” of Mr Bellante here today.

After hearing from registered medical practitioner and consultant psychiatrist Dr Damian Mohan, Ms Justice Margaret Heneghan on Wednesday made an order committing Mr Bellante back to the Central Mental Hospital in Dundrum.

Dr Mohan told the court he has had weekly contact with Mr Bellante for most of last year and all of this year, where he has undergone extensive psychiatric assessment.

The doctor said Mr Bellante moved from the acute phase of his illness to the rehabilitation phase in mid 2014.

“His condition was challenging at the outset and it proved difficult to treat with high levels of medication. He had a strong belief that the victim represented an evil force while he was a good force. It took several months of intensive treatment before there was any improvement in his condition,” said Dr Mohan.

The court heard the diagnosis of Mr Bellante was of “paranoid schizophrenia” and it was only during the latter end of 2014 and early 2015 that the Italian man began to develop an insight into the seriousness and gravity of his actions. Since then he has continually expressed remorse and on numerous occasions he has expressed deep regret for ruining two family’s lives.

Dr Mohan told the judge that Mr Bellante no longer believes he was compelled by external forces to kill Mr O’Gorman and he now knows it was as a result of a “delusional or false belief.”

“He realises he is still at risk of over interpreting events and accepts he is benefiting from treatment and requires medication for the rest of his life,” said the doctor.

“Having extensive knowledge of his case and full access to his file and having reviewed him since the jury returned the verdict on July 31, I am satisfied he still suffers form a mental illness and disorder which affects a persons thinking and perceiving emotion and requires medical treatment in his own best interest,” said the doctor.

While there has been a considerable improvement in his condition, it remains only partially treated.

The court heard due to the severity of his illness, failure to admit Mr Bellante to the Central Mental Hospital would lead to a serious deterioration in his condition and he requires ongoing supervision.

“In the event the court makes a decision to transfer him to the Central Mental Hospital, his treatment plan will be reviewed periodically every six months and essentially his level of risk and future compliance will be monitored,” concluded the doctor.

Following this Ms Justice Heneghan said she had previously heard from Dr O’Neill and Dr Monks and this morning she heard from Dr Damien Mohan.

“I am satisfied it is appropriate to make an order committing Mr Bellante to a designated centre which is the Central Mental Hospital for inpatient care,” said the judge.

Last month the jury heard that the Italian man admitted killing his landlord in Castleknock last year and told gardai in an interview that he ate what he believed to be a part of the deceased’s heart.

Also two consultant psychiatrists told the trial jury that Mr Bellante fulfilled the criteria for a special verdict of not guilty by reason of insanity.