Tinder rape case: ‘I was looking for a boyfriend. I met a monster’ 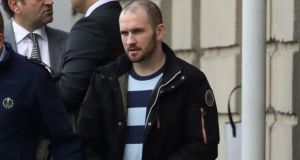 Patrick Nevin to be sentenced for sex attacks on women he met on Tinder. Photograph: Collins Courts

A woman raped by a convicted sex offender who she met online has told a court she thought she would die during the attack.

Patrick Nevin (37) raped the woman during their first meeting after they had being chatting on the dating app Tinder and over the phone.

The woman told him that she was not interested in meeting for a “one night stand” or a hook up.

Reading from her own victim impact statement, the mother of one told the court that she feels “tainted, dirty and stupid” for meeting up with Nevin.

Nevin will be sentenced next month at the Central Criminal Court for two attacks on women he met up with via Tinder.

The father-of-two was due to stand trial on that occasion but changed his pleas to guilty following a legal ruling, which would allow the prosecution to introduce evidence from other women describing attacks by Nevin on a first date.

On Monday, the victim of the rape told the court: “When I signed up to Tinder, it was to look for a potential boyfriend/relationship. I wasn’t aware I’d be meeting a monster. He has put my life on hold for nearly four years.

“I feel he took a part of me away when he did what he did and I’m not sure I will ever get that part of me back,” she said.

“To say I was terrified is an understatement. After he raped me, I was convinced he was going to leave me for dead in that area – beside an old graveyard.

“I had images running through my head of how he was going to kill me. He had the strength”.

She said: “Sometimes walking down the street I would see guys that looked like him and I would panic. He has shattered my confidence... On the rare occasions I go out, I can’t relax fully and I just can’t trust guys.

“It absolutely breaks my heart that one day I will have to explain to my son when he’s older about [HOW]that ‘bad man did something very bad to his mother’.”

The victim impact statement of the other woman was not read into court.

The former UCD student and computer programmer was separately convicted by a jury at Dublin Circuit Criminal Court in December 2017 of sexually assaulting a third woman, a Brazilian student, after driving her to the UCD campus in south Dublin on July 23rd, 2014. He had denied the offence.

Nevin has former addresses at Meadowlands Court, Mounttown Road, Dún Laoghaire and Dundalk, Co Louth. He is in custody since his conviction last December.

Lawyers for Nevin asked the court to consider in mitigation his guilty plea and said this plea was of comfort to the victims.

Paddy McGrath SC, defending told Ms Justice Eileen Creedon that the plea was an expression of Nevin’s remorse. He also said Nevin has written letters of apology to the victims.

He said that his client is a relatively young man and asked the court to leave him some light at end of tunnel.