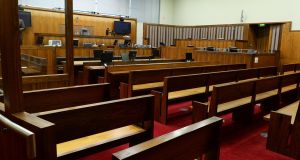 Ms Justice Isobel Kennedy said at the Central Criminal Court (above) that Keith Aherne (23) aided and abetted the commission of the offence and was liable as a principal offender. Photograph: Cyril Byrne

An unemployed Cork man who held a woman down while another man raped her has been jailed for nine years.

Keith Aherne (23) was convicted last March at the Central Criminal Court of raping the woman in a park in Cork city on June 28, 2013. He had denied the charge.

Another man, aged 22, pleaded guilty last March to raping the woman. He died before his sentence hearing earlier this month.

Ms Justice Isobel Kennedy said that Aherne aided and abetted the commission of the offence and was liable as a principal offender. She said that rape is an attack on the bodily and psychological integrity of a woman.

She said Aherne held the victim down but accepted his role was the lesser one of the two men. She said the fact that Aherne declined to have sex himself with the woman was a mitigating factor affecting his moral culpability.

Ms Justice Kennedy said that the main aggravating factors were the severe impact of the attack on the victim and the fact that were two men present. She also noted Aherne’s young age, his history of addiction difficulties and his hopes to improve his life.

She sentenced Aherne of Sawmill Lane, Sawmill Street, Cork to 10 years with one suspended on condition he keep the peace and that he have no contact with the victim in perpetuity.

Ahern has 41 previous convictions including robbery, assault and possession of drugs.

The victim told the court that since the attack she lost all her confidence and “even my will to live”.

She said that Aherne had power over her on the night, saying “you held me down and watched while another man raped me”. He repeatedly told her “it’s alright girl, it’s alright” as she sobbed and repeatedly said no.

The victim had been drinking with friends in the park and fell asleep. She told gardaí­ that when she woke up two men she didn’t know had joined the group and her mobile phone was missing.

Her friends left some time later but the woman was anxious to find her phone and stayed in the park. The two men stayed behind and offered to help her look for the phone.

They said to her: “If you do us a favour we can do you a favour”. At one point Aherne tried to kiss her but she told him to go away.

She was sitting and crying over her phone when the attack began. The two men tried to kiss her simultaneously and she leaned back to get away from them.

Aherne then grabbed her by the shoulder and she fell back onto her stomach. Aherne held her down while the other man raped her.

After raping her the other man invited Aherne to rape her too, asking him if he wanted to “lob it in”. Aherne said no and the men walked off, leaving the victim crying.

Aherne told the other man “we can’t leave the beour like that, that’s lousy” and he walked back and gave her a hug. The woman told gardaí­ she thought he was being sympathetic but didn’t know why she hugged him.

As she was leaving the park she shouted after the men that she would go to gardaí­. The other man told her “I’ll kill you stone devine dead” if she did and said he knew where she lived.

The woman told a taxi-driver immediately that she had been raped and was brought to a sexual assault treatment unit.

In her victim impact statement, read to court by Garda Sergeant Katrine Tansley, the woman said that after the rape she was diagnosed with depression and a condition that causes her to pull her own hair out.

“They took an awful lot from me,” she said, adding that she repeatedly asked herself why she had been in that park that night. She said Aherne could see how distressed and upset she was during the attack.

Gda Sgt Tansley told the court that when the rape began the victim began crying and repeatedly saying no.

Counsel for Aherne said that he had been pulled into a life of drink and drugs and that his other convictions were for crimes committed to feed his habit.

He said that his client had played a lesser role in the attack and had tried to offer some comfort to the woman.

He said Aherne’s parents had alcohol and drug addiction problems and Aherne didn’t have the best start in life. He said he hoped to get free of drugs and to make a fresh start in life after he has served his sentence for this.