Murder accused claims he was acting in self-defence 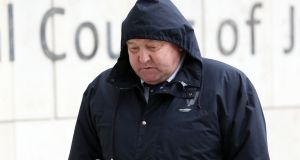 Donal Colgan arrives at the Central Criminal Court. He has pleaded guilty to manslaughter but not guilty to the murder of David Sheridan. Photograph: Collins Courts.

A Dublin man who was arrested on suspicion of a fatal stabbing told gardaí that he was acting in self defence after two “lads” attacked him.

Donal Colgan (66) formerly of Killarney Court, Killarney Street, Dublin 1 has pleaded guilty to manslaughter but not guilty to the murder of 44-year-old David Sheridan.

Mr Sheridan was fatally stabbed outside Luigi’s chip shop on the North Strand Road, Dublin 1 on the night of August 17th, 2014.

Mr Colgan’s plea was not accepted by the State and he is on trial at the Central Criminal Court.

On Thursday, Sgt Chris Cahill told prosecuting counsel Paul Burns SC that he was present when Mr Colgan was arrested in the early hours of August 19th, 2014.

In the Garda car on the way to the Garda station, Sgt Cahill made a note after the accused man said: “It was self defence. Two lads attacked me.”

Det Sgt Mark Waters told Mr Burns that he searched Mr Colgan’s home at Killarney Court. He said e found the clothes the accused man was wearing on the night of the stabbing and the knife that the prosecution alleges Mr Colgan used.

He agreed with defence counsel Garnet Orange SC that Mr Colgan’s clothes were clearly visible in his apartment and no attempt had been made to wash them or remove evidence.

The knife was also easily found.

He also agreed that the accused man had carried on “as if nothing happened” the day after the stabbing.

. He got up early, as was his usual routine, and later that evening went to the Sunset House pub.

Teresa Marcela was working at Luigi’s when the stabbing happened and told Mr Burns that she remembers that Mr Colgan would come to the chipper a couple of times a week and order a bag of chips.

Before the night in question, she had never seen Mr Sheridan but she thought he seemed like a “nice man” who ordered his food and minded his own business.

There were a number of people in the shop and although she could not hear what was being said, she knew that there were words between Mr Colgan and some young boys who were waiting for their food.

She got the impression the boys were “slagging” Mr Colgan, trying to wind him up and he was answering back.

When Mr Colgan went outside she could see that a fight started between Mr Colgan and Mr Kinlan and the deceased. She thought that Mr Kinlan was trying to get in and stop it.

When Mr Burns asked her who she thought was the aggressor, she replied: “Mr Colgan would have been throwing more punches.”

That fight broke up and she continued working until some minutes later she heard someone say “he’s coming back”.

As she looked out the window she saw the accused take a knife out of his jacket, lift his arm up and stab the deceased on the head and back. “It wasn’t a small knife,” she added.

Dr Curtis concluded that the cause of death was “multiple stab wounds”. Having examined a block of knives found at Mr Colgan’s home, the pathologist identified a vegetable knife with a 20.5cm blade as the “most likely” weapon used.

A toxicology report showed that the deceased had alcohol, methadone and sleeping tablets in his system.

Under cross-examination Dr Curtis agreed that the wounds were not concentrated in one area and that they suggested a “highly mobile event” that could have taken place in a very short space of time.

The trial continues in front of Justice Tony Hunt and a jury of eight women and three men. One juror was discharged after revealing that he recognised one of the witnesses.