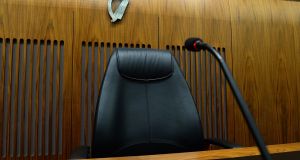 A man who twice raped his then heavily-pregnant partner has been given a partially-suspended prison sentence of 10 years. File photograph: Cyril Byrne/The Irish Times

A father-of-five who twice raped his then heavily-pregnant partner has been given a partially-suspended prison sentence of 10 years.

The man’s trial at the Central Criminal Court had heard that the woman gave birth to the couple’s second child a few days after the assaults.

The jury convicted him of both following a three-week trial last month .

He suspended a further two years on condition that the man engage with a sex offenders’ treatment programme while in custody.

In a victim impact statement, the woman described how she was left “stunned” after the assaults.

“The man I loved, the father of my daughter, and of the baby I was carrying, raped me and then tried to kill me,” the woman said.

The victim described how the accused ruined the birth of her baby daughter, as all she could think of was what he had done to her.

“I couldn’t function, I felt like I was on autopilot. I was there physically but not mentally. I had a nervous breakdown, I was crying all day every day,” the statement read.

She said she believed the accused should never be allowed out of prison.

During the trial, Garda Brendan Harte told Eileen O’Leary SC, prosecuting, that the first rape occurred at the couple’s home on December 22nd, 2014.

The court heard that the victim, who at the time was 40-weeks’ pregnant, was asleep in bed and awoke to discover she was being raped.

The second rape occurred a day later, after the victim woke up to find the man’s hands around her throat, choking her.

The victim believed she would die and begged her partner to let her go.

On this occasion, the couple’s one-year-old daughter was asleep in a cot beside the bed.

The man told the woman: “The sooner you stop struggling the better, if you don’t stop I’ll smash your face in.”

He also laughed and told her, “I’m going to rape you up the ass”, before committing that act.

Ms O’Leary said the man co-operated with gardaí, but never expressed any remorse for his actions.

Blaise O’Carroll SC, defending, told the court that the relationship had initially been a “very loving” one, and said the man had been the primary carer for the couple’s child.

He said his client’s life was now “shattered” and his children had distanced themselves from him.