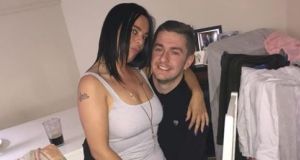 Amanda Carroll with Sean Nolan, who has been found guilty of her murder. Photograph via Facebook

A Central Criminal Court jury has found an electrician guilty of murdering his partner of four months, whom he strangled in her bedroom after a drinking session.

The jury rejected the defence contention that Sean Nolan (36) was too drunk to have formed the intent to murder his girlfriend Amanda Caroll (33) and what had happened to the mother-of-two was an “accidental death”.

Nolan, with an address at Ashington Crescent, Navan Road in Dublin had pleaded not guilty to murder but guilty to the manslaughter of Ms Carroll at Homestead Court, Quarry Road, Cabra, Dublin 7 on October 21st, 2018.

Defence counsel Michael O’Higgins SC, with Garrett McCormack BL, asked for a verdict of manslaughter on the grounds of lack of intent due to alcohol intoxication. Murder is a crime of specific intent and voluntary intoxication can have the effect of reducing the offence of murder to manslaughter, he said.

In his charge to the jury, Mr Justice Michael MacGrath said if they had any doubt about whether the accused was intoxicated on the night, they must resolve that in favour of the accused.

Instead the jury accepted the State’s case that there could be no doubt that Nolan intended to kill or cause serious injury when he put his hand around Ms Carroll’s neck for 20 seconds.

In his closing speech, prosecution counsel Shane Costelloe SC, with Caroline Cummings BL, argued that drunken intent was still an intent and one can decide in a split second to kill or cause serious injury to someone when they have alcohol taken.

Evidence was given that the couple went on a “binge drinking session” that started early in the day and continued at different locations throughout Dublin into the night.

The accused and Ms Carroll were involved in a road traffic collision a few hours before the 33-year-old was killed and both fled the scene before being intercepted.

Blood samples were taken from Nolan as there was a concern he was drink driving or drug driving. Ms Carroll was arrested for a public order offence and had to be handcuffed with her hands behind her back after striking out at gardaí. However, after being detained in Mountjoy Garda station for a couple of hours, the pair were freed and continued drinking into the night.

When they returned to Ms Carroll’s apartment that night, Nolan put one hand on the neck of the mother-of-two and the other over her mouth after she called him by the name of her ex-boyfriend, said she never loved him and tried to hit him.

“I was angry. I just wanted her to go asleep and stop,” the accused told gardaí. Nolan explained to detectives that he knew his girlfriend was dead when he woke up in her bed the next morning and had “just panicked” before he ran out of the apartment.

Ms Carroll’s body was discovered the following afternoon by her then 16-year-old son Denis Carroll, who had left the house earlier in the morning to play football not knowing that his mother was dead.

Denis Carroll told the trial he could see his mother was not breathing. “I could see her cheek was puffy and she was cold. I knew that I was not going to see her again.”

The trial heard that gardaí found Nolan on a North Dublin street after they identified the body of Ms Carroll, with the accused telling them that the couple had argued and he thought he had “choked her until she passed out” before falling asleep.

The defendant said he had “freaked” and spent the day walking around.

When he was then arrested on the Navan Road and placed in a Garda patrol car, Nolan said “I probably killed her” when told of Ms Carroll’s death.

The accused also gestured to the arresting officer how he had put his hand on his partner’s neck and over her mouth “to get her to shut up”.

Assistant State Pathologist, Dr Margaret Bolster, testified that Ms Carroll died from compression of her neck and mouth which was complicated by the ingestion of sedative type drugs.

Ethanol, Diazepine, sleeping tablets, alcohol, antidepressants and cocaine were detected in the deceased’s system. Dr Bolster pointed out that the mother’s death could not have occurred without asphyxia but the drugs consumed had an added effect.

It was the defence case that Ms Carroll died from a combination of asphyxia aggravated by a weakened respiratory system, which was compromised by ingesting a huge quantity of alcohol and prescribed drugs. Under no circumstances had the accused intended to kill his girlfriend as his previous conduct on the night emphatically pointed the other way, said Mr O’Higgins.

The 12 jurors found Nolan guilty of murder by a majority verdict of 10-2. They had deliberated for eight hours and eight minutes over five days.

Following the v erdict, Mr Justice MacGrath thanked the jury for the attention they had given the case. He exempted them from jury service for 10 years.

Nolan made no reaction when the verdict was delivered.

Mr Justice MacGrath will hand down the mandatory sentence of life imprisonment on November 4th and remanded Nolan in custody until that date. The judge directed the preparation of a victim impact report by Ms Carroll’s family.