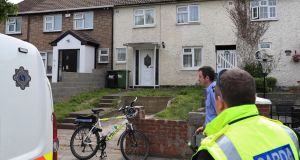 Gardaí at the Rathfarnham home of Patricia O’Connor whose dismembered body was found in the Wicklow Mountains. Photograph: Colin Keegan/Collins Dublin.

A Dublin man has pleaded not guilty to murdering a 61-year-old grandmother whose dismembered remains were found scattered across the Wicklow mountains.

At the Central Criminal Court on Tuesday morning, the deceased’s granddaughter was also arraigned, where she denied disguising herself as her grandmother after the alleged murder in order to conceal her death.

Kieran Greene (34) of Mountainview Park, Rathfarnham, Dublin 14 is accused of murdering Patricia O’Connor at the same address on May 29th, 2017. He pleaded not guilty to the charge.

The three accused were also arraigned before the Central Criminal Court on Tuesday morning. The registrar read the indictment to each of them and asked how they were pleading.

Louise O’Connor pleaded not guilty to agreeing to or acquiescing in her daughter Stephanie O’Connor disguising herself as Patricia O’Connor in order to conceal the fact that she was dead.

Mr Johnston pleaded not guilty to assisting Mr Greene in the purchase of various implements at Woodie’s, Mr Price, B&Q and Shoe Zone, Tallaght, Dublin 24 on June 9th, 2017, which were to be used in the concealment of the remains of Mrs O’Connor.

Mr Johnston also denied engaging in the refurbishment of a bathroom at Mountainview Park, Rathfarnham, Dublin 14 between May 31st, 2017 and June 9th, 2017, in order to destroy or conceal any evidence relating to the murder of Mrs O’Connor.

Stephanie O’Connor pleaded not guilty to disguising herself as Mrs O’Connor at Mountainview Park, Rathfarnham, Dublin 14 in order to conceal the fact that she was dead.

Mrs O’Connor was first reported missing on June 1st, 2017 and a number of her body parts, including her head and hands, were discovered dispersed in a 30km area across the Wicklow mountains later that month.

Addressing the jury panel on Tuesday morning, Mr Justice Michael White said there will be evidence given and references made to the “disinterment and dismemberment of the body parts” of the deceased. “If this presents a difficulty to being a juror, please let me or the trial judge know,” he remarked.

A jury of six men and six women was sworn in to hear the trial of the four accused, which is due to begin on Wednesday before Mr Justice Paul McDermott and is expected to last between five and seven weeks.

Mr Justice White told the jury that Mrs O’Connor had worked at Beaumont Hospital in Dublin and she had retired four or five years before she died.