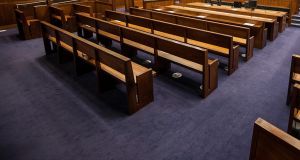 Comey of Pearse House, Pearse Street, pleaded guilty at Dublin Circuit Criminal Court to unlawful seizure of a car, assault causing harm and possession of a syringe in the north inner city on May 12th, 2014. File photograph: Collins Courts

A Dublin man who hijacked a car and repeatedly punched a heavily pregnant woman in the passenger seat while driving the car through town will be sentenced next month.

Stephen Comey (29) had been released from prison six weeks prior to this offence.

Comey of Pearse House, Pearse Street, pleaded guilty at Dublin Circuit Criminal Court to unlawful seizure of a car, assault causing harm and possession of a syringe in the north inner city on May 12th, 2014.

The court heard he had a “tragic background” but was now anxious to rehabilitate himself.

Judge Patricia Ryan noted that Comey had made great efforts to rehabilitate himself while in custody for this offence and now had the support of his family. She said she wanted him to have a plan in place for when he leaves custody.

The judge ordered an updated probation report and said she will finalise sentencing in April.

Sergeant David Wogan told Fiona McGowan, prosecuting, that a Chinese couple had parked their car in the city centre and the husband went to get a parking ticket, leaving the keys in the ignition. His 7½-month pregnant wife stayed in the car in the passenger seat.

She had removed her seatbelt and was turning to get a coat when the driver door opened and a man shouted at her to get out. The car started moving and she had no chance to get out. She tried to put the gear stick into neutral but Comey punched her in the face.

The woman said the punching persisted and she did not know how many times she was hit. She tried getting out of the car and called for help. She was crying and very upset.

During the struggle the man shouted at her and tried to push her out of the car while it was in motion. She felt unable to jump out because of her pregnancy.

Sgt Wogan said gardaí­ had come across the silver Audi at the Gardiner Street and Mountjoy Square junction and saw it driving erratically at speed with the front passenger door open.

They saw Comey in the car having a physical altercation with the distressed woman and her husband in the street chasing the car.

Gardaí­ followed the car to Gardiner Lane where it struck and scratched a number of parked cars. It came to a stop and the man could be seen punching the woman.

The car took off again towards Gardiner Street and broke a red light at Seán McDermott Street before coming to a stop.

Comey grabbed a mobile phone from the car before exiting and was put to the ground by the arresting gardaí who found a syringe in his possession.

Anne Marie Lawlor, defending, said her client was now drug free and had been using his time in custody wisely. She said he was doing extremely well and anxious to avail of any chance to rehabilitate himself.

She handed in a “comprehensive” psychiatric report on Comey and his “tragic background” which was read by Judge Ryan.