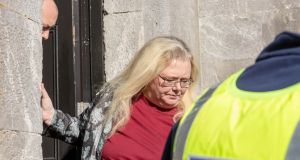 Rita O’Driscoll of Bridge Street, Bandon, Co Cork is charged with the murder of Timmy Foley (44) and with assault causing serious harm to his brother, Jason Foley, on October 8th, 2018 at Dan Corkery Place in Macroom, Co Cork. She denies both charges. Photograph: John Delea

A forensic scientist who examined a crime scene where a man died after he sustained 28 stab wounds found blood stains matching the DNA profile of the accused and the victim on a knife recovered from a toilet cistern in the house, a trial has heard.

Rita O’Driscoll of Bridge Street, Bandon, Co Cork is charged with the murder of Timmy Foley (44) and with assault causing serious harm to his brother, Jason Foley, on October 8th, 2018 at Dan Corkery Place in Macroom, Co Cork. She denies both charges.

At a sitting of the Central Criminal Court in Cork, Dr Sandra McGrath of Forensic Science Ireland (FSI) gave evidence of the examination she made of the crime scene on October 8th, 2018.

Dr McGrath, said it was her understanding that an altercation had occurred in the property at Dan Corkery Place and that Timmy Foley had sustained 28 stab wounds and died at the scene.

She said it was her relayed to her that Timmy Foley was found lying on the floor in the house with 28 stab wounds, Jason Foley had incurred two stab wounds while Ms O’Driscoll had injuries to her left arm and head. Timmy Foley was pronounced dead at the scene.

Dr McGrath did an analysis of blood stain patterns in the house. She found blood in three areas of the house – the living room, bathroom and hall. She said Timmy Foley was found on the living room floor. There was a pool of blood by the couch.

She analysed blood on the couch. The DNA profile on the right armrest and left lower leather cushion matched that of Timmy Foley while the left and right back cushions matched the blood profile of Rita O’Driscoll.

Dr McGrath found various blood stains in the house which matched the DNA profiles of the late Timmy Foley and Rita O’Driscoll.

She made an examination of the bathroom and found a drip trail on the floor and left side of the sink basin which matched the profile of Rita O’Driscoll. There was a mixed DNA profile matching Rita O’Driscoll and Timmy Foley from blood stains analysed on the toilet seat, toilet bowl and cistern lid.

A knife which was recovered from the cistern was also examined. It had been submerged in water. There was no blood stain evident on the tip or edge of the blade. There was a small blood stain in the area where the blade and handle meet. It showed a mixed DNA profile for Timmy Foley and Rita O’Driscoll.

The post-mortem evidence is expected to be heard in the coming days.

In outlining the case last week, prosecuting barrister Siobhan Lankford said it was anticipated the post-mortem evidence would be that Timmy Foley sustained 28 stab wounds to his head, thorax, abdomen and right leg, an incision of the ear and the carotid artery.

He also had stab wounds to the lung and liver. She said that up to four of the wounds were potentially fatal.

Ms Lankford added that some of the wounds were consistent with defence wounds.

The trial continues on Monday before Ms Justice Eileen Creedon and a jury of five men and seven women.