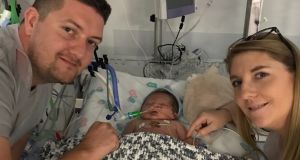 The family of a baby boy who died five days after birth is taking a legal action against the National Maternity Hospital over claims he suffered a skull fracture during an instrumental delivery.

An inquest into the death of Henry McMahon at Dublin City Coroner’s Court on Thursday heard he died from brain damage caused by a lack of oxygen.

Dublin City Coroner Dr Myra Cullinane recorded a narrative verdict given the complexity of the evidence which she said was “a neutral summary” of how he died.

Henry died on September 23th 2017 in Our Lady’s Hospital for Sick Children in Crumlin on the first wedding anniversary of his parents, Simon and Sorcha McMahon, from Stillorgan five days after he was born at the Holles Street hospital.

The boy had been diagnosed in an ante-natal clinic with a congenital heart condition, known as hypoplastic left heart syndrome.

Pathologist Michael McDermott, who carried out a post-mortem on the body of the baby, said the immediate cause of death was a significant lack of oxygen to the brain.

Dr McDermott said associated factors were a skull fracture and his congenital heart condition while bleeding between the baby’s skin and skull was a contributory factor.

He said the injuries were consistent with happening around the time of the baby’s birth, although there was no direct evidence that he suffered brain damage directly as a result of the use of delivery instruments.

The inquest heard the baby’s condition was operable with high a success rate and plans were in place to transfer him to Our Lady’s Hospital for surgery directly after birth.

At an earlier hearing in July, evidence was heard that a forceps and vacuum cup had been used by medical staff during the baby’s birth.

His mother was induced on September 18th following a high risk pregnancy complicated by diabetes, hypertension and the baby’s heart condition.

During labour, hospital staff became concerned about the baby’s heart rate and a vacuum cup was used three times unsuccessfully to aid delivery.

The inquest heard consultant obstetrician, Professor Donal Brennan, was called to attend Ms McMahon and he manually rotated the baby’s position before delivery using a forceps at 4.53pm.

In evidence, Prof Brennan said he had “no doubt” that some of the baby’s injuries occurred during delivery but he could not say by which instrument or when they happened.

At a resumed hearing on Thursday, Prof Brennan said the nature of Henry’s delivery was very rare and he had only witnessed such a birth two or three times in his career.

Prof Brennan said a protocol on how such births should be recorded by a qualified doctor or midwife was being drafted following a review of the circumstances of Henry’s death.

He claimed Dr Farren had been expecting to be dealing with a relatively straightforward delivery but it had turned into “an unexpected event”. The obstetrician said it was appropriate she had stopped when faced with a difficult situation.

Lindsey Farrell, a student midwife who took notes of baby Henry’s delivery, confirmed forceps were only used on one occasion during the delivery and it was by Prof Brennan. She denied the suggestion by Richard Kean SC, for the McMahon family, that her notes were inaccurate but accepted they were incomplete.

Dr Orla Franklin, a paediatric cardiologist at Our Lady’s Hospital, said between 35 and 40 children were born in Ireland each year with baby’s Henry’s condition, She added they had a survival rate of 80-90 per cent after surgery which normally required a minimum of three operations.

The inquest heard that without surgery babies with the condition would usually die within five days of birth.

Dr Franklin said it had not been feasible for baby Henry to have surgery because of the fractured skull he had suffered.

Speaking after the inquest, Ms McMahon said she was happy her family had finally got answers after 27 months.

The couple now have a baby daughter, Pippa Mai who will celebrate her first birthday next week but Ms McMahon said they should have a 2½ year old boy as well.

The couple were accompanied by the baby’s grandfather, Stephen McMahon, the chairman and co-founder of the Irish Patients Association.

Lawyers for the McMahons said a legal action against the National Maternity Hospital was “at an advanced stage”.