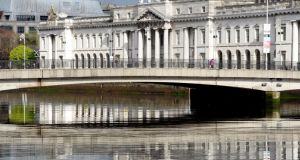 A Garda sergeant suffering from Huntington’s disease drowned in the River Liffey, an inquest has heard.

A father of three originally from Gurteen, Co Offaly, he was a member of the Offaly under 21s football team which won the All-Ireland in 1988. He died on October 5th, 2015.

Two years before his death, Sgt Moran was diagnosed with Huntington’s disease, a neurodegenerative condition that leads to cognitive, emotional and physical symptoms including involuntary movements.

He loved his work and embraced it, she said. He was looking forward to the Offaly county final on October 11th, 2015, as the All-Ireland winning panel he was a member of was due to be celebrated.

‘Treated them as friends’

“He always faced his problems and dealt with them. He was the most positive person.”

Sgt Moran was at Dublin Coroner’s Court on the morning of his death for an inquest at 11am. CCTV footage showed him leaving the court and crossing to Store Street Garda station where he appeared not to be able to remember the Garda access code.

In the weeks before his death, he’d begun to display “out of character” behaviour, and his widow said she had been getting worried about him.

An involuntary movement caused him to knock a drink in a restaurant and he was embarrassed, the court heard.

On the morning of his death, witness Jacqueline Stone was crossing Matt Talbot bridge, a few paces behind a man she later became aware was Sgt Moran.

“All of a sudden, he appeared to throw a blue folder over the bridge and then just held on to the railing and went over. It all happened so fast,” she said.

His body was later recovered from the river and death was pronounced at the scene at 3pm. The cause of death was drowning and the toxicology analysis was negative for alcohol and drugs.

“We all looked up to Padraig, he was a strong, reasonable, outstanding member of An Garda Síochána,” Insp McTiernan said.