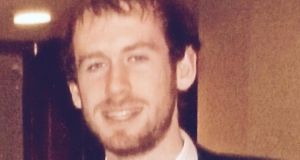 Catherine Conneely, mother of the late Ronan Conneely (above), told his inquest he was “a very sociable, happy young lad. He was very kind, loyal and had loads of friends. We talk about him half the day, nearly every day. He was just a great son really.”

A student was fatally injured when he fell down a metre-high drop in a dark car park after attending a college ball, an inquest has heard.

Ronan Conneely (23), of Derryloughaun East in Spiddal, Co Galway, was just months from finishing his Masters when he suffered severe head injuries in the fall at the Dyke Road car park in Galway city centre in the early hours of February 6th last year.

On the night of the fall, Mr Conneely had been attending a Nurses and Engineers Ball at the Radisson Hotel.

His mother Catherine Conneely told the inquest they spent the day getting him ready before he was picked up by a friend at 8pm.

At 2.20am, gardaí­ called her to say he had been seriously injured.

When the family arrived at University College Hospital Galway, they were told he was being transferred to Beaumont Hospital.

“Ronan struggled for several days in Beaumont and he had two operations while he was there to remove one large clot from his brain, and the other operation was to help make space for the swelling,” she said.

The postmortem confirmed death was due to severe head injuries consistent with a fall from a height.

The inquest heard he had gone to the ball at the Radisson at about 11pm after attending a number of house parties with friends.

Witness Simon Weder said they lost track of each other at the ball, which was attended by 1,500 people. “While I was with Ronan we were both merry, but I wouldn’t say that we were very drunk,” he said.

Hackney driver Valerijs Murasovs was waiting for a fare in the Dyke Road car park when he saw Mr Conneely walk by his car. He was not stumbling and seemed focused on one point, he said.

Mr Conneely walked straight over to the kerb where there was a metre drop to a lower car park, and then disappeared.

Mr Murasovs said he turned his car and entered the lower car park to find the student lying face down on the concrete with blood around his head.

The car park is often used by students as a short cut, he told the court.

Garda Francis Hand said the night of the incident was dark and misty, and the area where Mr Conneely fell was poorly lit with no railings between the upper and lower levels.

Coroner Dr Brian Farrell pointed to the configuration of the car park as a risk factor in the death and returned a verdict of misadventure.

He is to write to Galway City Council recommending that they install railings.

Speaking following the inquest, Ms Conneely said the car park was an “accident waiting to happen”.

She said her son was just months from completing five years of study to become a civil engineer when he died.

“He was a very sociable, happy young lad. He was very kind, loyal and had loads of friends. We talk about him half the day, nearly every day. He was just a great son really,” she said.