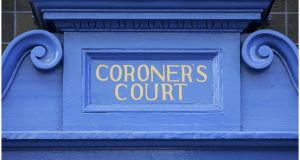 Niall Mahony’s family questioned why it took so long for him to be discovered in the public toliet in Clare. File photograph: Dara Mac Dónaill

Members of an Ennis family fear that that their late son and brother, Niall Mahony could have lay undetected in a ‘superloo’ for up to 20 hours in Ennis before his body was discovered.

At an inquest into the death of the 38-year-old father of two on May 2nd last, Mr Mahony’s sister Katherine Mahony told the inquest in Ennis “we reckon he might have been there from 12pm the previous day”.

His body was discovered by a maintenance worker for JCDecaux Ireland, Steven Wragg at the Clare County Council Abbey Street car-park public toilets shortly after 8am on May 2nd last.

A doctor who attended the scene reported that rigor mortis had set in and the post mortem reported that there was the possibility that Mr Mahony had been in the public toilet from the previous day.

At the inquest, Katherine Mahony asked “why was it so long before he was found?”

Another family member said she phoned the gardaí the previous night at 9.30pm when she couldn’t contact Mr Mahony as he was on a curfew at the time.

Insp Helen Costello said he would not have been considered high risk but that Garda patrols would have been informed of the call.

Mr Wragg told the inquest that usually after people are inside a public toilet for longer than 20 minutes, the alarm goes off and the door opens and stays open.

“So I would say he [Mr Mahony]pulled the door behind him after it opened so it would stay closed unless he pressed the button from inside to open it.”

Clare County Coroner, Isobel O’Dea said the post mortem found that Mr Mahony died as a result of drug poisoning. There were multiple drugs in his system made up of recreational and medical drugs. Ms O’Dea describe Mr Mahony as “a well known character around town”.

He lived at home with his mother, Maralyn at Clancy Park in Ennis. The mother of nine was the last person to see him alive.

She told the inquest in a deposition that she was “heartbroken and so upset” by his death.

“No family should have to suffer the loss of a child,” she said.