Hawe inquest: ‘I think Alan has done something terrible’ 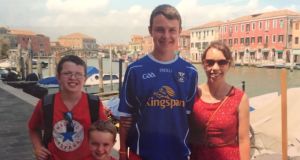 The inquest has begun into the murders of teacher Clodagh Hawe and her three sons, Liam, Niall and Ryan by their father Alan Hawe and his suicide at a house near Ballyjamesduff in Cavan in August 2016.

Mary Coll, Clodagh’s mother, told the inquest at Cavan Courthouse she drove to the family home at Oakdene Downs in Berconey on the morning of Monday, August 29th, 2016, when her daughter failed to drop her two youngest children Niall (11) and Ryan (6) off at her home in Virginia as they had agreed the night before.

Mrs Coll travelled over to the Hawe family’s house after she was unable to reach her son-in-law Alan (40), a vice-principal at the local Castlerahan National School in Ballyjamesduff, and her daughter Clodagh (39) on their mobile phones and they did not respond to text messages.

There was also no answer on the house phone when she called it.

“It was unlike Clodagh not to contact me if she was going to be late,” said Mrs Coll who was accompanied at the hearing on Monday by her daughter Jacqueline Conolly, Clodagh’s uncle-in-law Gerry McDermott and other relatives.

When Mrs Coll arrived at the family home that morning in August 2016, she noticed the two family cars parked in the driveway and that the curtains were closed in the sitting room and bedrooms.

“I knew something was wrong,” she said.

She thought at first that the family had succumbed to carbon monoxide poisoning.

Mrs Coll then went around to the rear of the house as she had a key to the backdoor. Just before she was about to put the key in the door, she noticed a note taped to the inside of the door.

“Please do not come in. Please call the gardaí,” read the note.

She went to the house of next-door neighbour Edith Harrigan.

“I told her I think Alan has done something terrible, that Alan had killed them all,” said Mrs Coll.

She knew it was his handwriting, she said, and that “something bad had happened,” she said in her deposition, read out by Superintendent Leo McGinn of Bailieboro Garda station as Mrs Coll sat in the witness box.

Mrs Coll told Cavan coroner Dr Mary Flanagan she became suspicious when she saw the note had stuck to the inside of the back door.

“I knew it was Alan’s handwriting,” she said. “I knew something terrible had happened. I just had that feeling.”

The night before everything had seemed normal to Mrs Coll. In her deposition, she explained how Alan, Clodagh and their sons had dropped over to her in Virginia as Liam (13) had a basketball match.

Alan and Clodagh drank tea, ate biscuits and chatted in the kitchen with Mary, while the three boys watched television in the sitting room. They left for home at 8.40pm as Ryan, the youngest, had to have a bath, she said.

“Everything seemed normal,” said Mrs Coll in her statement.

Before leaving, Clodagh said she would drop Niall and Ryan over to her the next morning as Liam had school, that she would be over at about 8.30am and not to worry if she ran late as there were no children in her own school that day.

When they were leaving, Mrs Coll wished Alan luck as the next morning he was returning to school after the summer break.

He thanked her for her good wishes and said, “thanks for the goodies,” referring to the biscuits she gave them.

“That was the last time I saw him,” she said.

Garda Alan Ratcliffe of Ballyjamesduff Garda station said when he arrived at the house after Mrs Coll called An Garda Síochána, he spoke with Mrs Coll and she was “visibly upset”.

He used one of Mrs Coll’s keys to enter the house through the back door.

When he entered the house at 11.21am, he walked through the kitchen and found Clodagh Hawe in pyjamas and a dressing gown lying on her stomach dead on a couch with injuries to her head.

A knife and small axe lay on the floor next to the couch.

He then proceeded to the hallway where he found the body of Alan who had taken his own life.

Garda Ratcliffe proceeded up the stairs to a bedroom to the rear-right of the house where he found the bodies of Liam and Niall, each lying in a single bed. Both had suffered injuries to their throats.

He then proceeded to a second rear bedroom at the opposite end of the house and found Ryan lying in a single bed and a knife on a pillow at the head of the bed. “There were no life signs present,” the garda told the inquest.

In the master bedroom of the house, Garda Ratcliffe found jewellery and jewellery boxes neatly stacked on the bed. He went downstairs again to tell colleague Garda Aisling Walsh that there were five bodies in the house.

He then went outside to the front of the property with Garda Walsh where Mrs Coll was waiting.

“I informed Mary Coll that I was sorry to tell her that I had found no one alive inside the house,” he said.

When Garda Walsh was in the witness box giving evidence of finding the bodies of the two eldest children in the house, she became visibly upset and had to take a few moments to collect herself.

Several other members of An Garda Síochána gave evidence at the inquest about the technical details found at the scene and around handwritten notes left at the house.

Detective Sergeant John Grant, who supervised the Garda Technical Bureau team which examined the scene that morning, said that gardaí found documents, a sealed envelope with a letter inside and note on the kitchen table. Some of these items were stained with blood, he said.

Firefighters battle to keep forest fire away from an explosives factory 14:55
President says banks are ‘big gap’ in collective effort to survive Covid-19 crisis 14:29
Testing of Covid-19 tracing app to begin but no date for launch 13:16
‘Dramatic increase’ in littering and dumping in north Dublin 12:28
Microsoft sacks journalists to replace them with robots 11:12