File on death of patient in ambulance fire sent to DPP 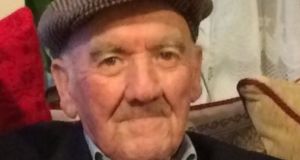 Christopher Byrne (79) from Suncroft, Co Kildare, died when the ambulance in which he was a patient was engulfed by fire outside the emergency department of Naas General Hospital on September 22nd, 2016.

A coroner may not be able to conduct “a meaningful and full” inquest into the death of a patient in an ambulance that went on fire three years ago because of the refusal of the Health and Safety Authority (HSA) to share the findings of its investigation into the accident.

Kildare County Coroner, Prof Denis Cusack, said on Monday the future of the inquest would be “entirely determined” by the attitude of the HSA’s board and its chief executive, Sharon McGuinness, to the issue of making information available to him.

His comments were made during an inquest into the death of Christopher Byrne, a 79-year-old pensioner from Suncroft, Co Kildare, who was fatally injured when the ambulance in which he was a patient was engulfed by fire outside the emergency department of Naas General Hospital on September 22nd, 2016.

Two paramedics who were in the vehicle at the time of the blaze were also injured, with one suffering severe burns.

Prof Cusack said the case was now going back almost three years and he was not sure “where the inquest can go”. The case has been adjourned on several occasions in response to applications from both the HSA and gardaí.

“In the absence of information being shared with me, I will have to consider whether I can complete a meaningful and full inquest.” Prof Cusack said.

The coroner said he may have to proceed on the basis of the information that was available.

A HSA inspector, Vincent Darcy, said its investigation file into the death of Mr Byrne had been given to the DPP on September 3rd and it was now awaiting directions.

Mr Darcy said the complexities of the case meant it was impossible to state how long before the DPP would be in a position to decide on whether it warranted a prosecution.

The inquest heard that a separate Garda inquiry into the death of the pensioner was ongoing based on information that had been shared with it by the HSA.

Prof Cusack said he had been informed by Supt Paul Dolan of Naas garda station that it would be concluded by November at the latest.

The inquest was adjourned for further mention to December 2nd.

However, Prof Cusack said it would be “well into 2020” before he expected a full hearing in the case could take place.

A HSA spokesperson later noted the coroner’s comments but said it could not make any further comment at this time as a file on the case was with the DPP.