Farmer died after he was trampled by cattle on his farm 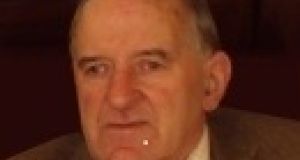 Seamus Smyth, from Geehanstown, Delvin, Co Westmeath was out farming on May 7th, 2018, a Bank Holiday, when the accident happened.

A 76-year-old farmer died after he was trampled while herding cattle on his farm.

Seamus Smyth was described as a content man who farmed all his life and liked a few drinks in the pub.

“He’d often sing a song, he loved music, the GAA and he hurled in his youth. He was a very happy bachelor farmer,” his sister Vera Smyth said following an inquest into his death.

Mr Smyth, from Geehanstown, Delvin, Co Westmeath was out farming on May 7th, 2018, a Bank Holiday, when the accident happened.

Dublin Coroner’s Court heard that a witness, Sean Carolan, was working across the road that morning.

“Seamus was telling me he had bought some cattle and that he was going to dose them and let them out in the field. He said he was waiting on a young lad to help him,” Mr Carolan said.

He saw the farmer and his helper let all the cattle back into the field in a bid to calm the situation.

When the two men tried to move the cattle from the field to the yard a second time, Mr Smyth was fatally injured.

He was blocking the lane to turn the animals as they exited the field.

Richard Shaw, who was in the field with the cattle, said he saw one of the bullocks jump at Mr Smyth.

“I didn’t see any of the animals hit Seamus. I just saw Sean Carolan put his head in his hands,” Mr Shaw said.

“I managed to stop some of the cattle. When I got to Seamus there was blood to his head. He was trying to get up,” Mr Shaw said.

Mr Smyth was airlifted to Tallaght Hospital in Dublin and arrived at 3.52pm.

A CT scan showed he had suffered a skull fracture and brain haemorrhage, multiple rib fractures and a fractured collar bone. He died five days later.

The cause of death was severe head injuries due to a fall and trampling by cattle, an autopsy found. The injuries to his chest were deemed a significant contributory factor.

“This was something that happened by chance and couldn’t have been predicted. There are dangers associated in dealing with animals. This was a very unfortunate accident. He was obviously a fit and able man, very active and very experienced, he’d been doing this work all his life,” the coroner said, extending her sympathies to the family.