At inquest of Séamus Wright, shot in 1972, family call for news of last four missing men 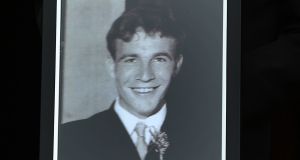 A photograph of Séamus Wright at his funeral last year: he was abducted, murdered and secretly buried by the IRA along with Kevin McKee in 1972. Photograph: Niall Carson/PA Wire 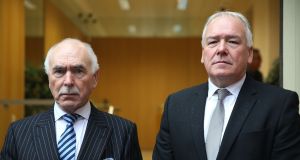 Geoff Knupfer (left) and Jon Hill of the Independent Commission for the Location of Victims’ Remains at the Coroners Court in Dublin, at inquests for Séamus Wright and Kevin McKee. Photograph: Brian Lawless/PA Wire

The family of Séamus Wright (25) have urged anyone with information on the four remaining IRA “Disappeared” men to come forward.

Mr Wright was shot in the head at a remote bog in Co Meath in 1972, an inquest into his death heard on Thursday. Mr Wright, from Bombay Street, West Belfast, Co Antrim had been married three years earlier.

Dublin Coroner’s Court heard he was missing for a short period in early 1972, but returned home at Easter. On October 2nd he went missing again, on the same date as another of the “Disappeared”, Kevin McKee.

Both bodies were found at bog land in Coughalstown, near Wilkinstown, Co Meath on June 25th, 2015.

In a statement, the Wright family said the inquest brought “final closure to a long painful process”.

“We would appeal that all is done to allow the remaining four families to bury their loved ones. We urge anyone with any information, no matter how insignificant, to come forward to the Commission,” the family said in their statement.

“His wife Kathleen called to say that he had come home from work, but left again and he was never seen again,” Ms Wright said. “His wife went to the Republican movement and to the church, but there was nothing. My mother and father and Kathleen went everywhere to try and get information, but never got anywhere.”

It took until Christmas 1998 for the family to find out what had happened. “We were told that he had been killed and secretly buried by the IRA,” Ms Wright said.

Both Mr Wright’s parents had passed away by the time his remains were found, as had Kevin McKee’s mother.

In her autopsy, Prof Marie Cassidy gave the cause of death as a gunshot wound to the head and said the bullet entered the left side of the head behind the ear. She found no other injuries.

Jonathan Hill, senior investigator for the Investigation Commission for the Location of Victims’ Remains, said an Irish 5p coin dated 1970 was found in the pocket of the clothing found.

He said the bodies of Mr Wright and Mr McKee were found 250 yards from where investigators thought they were buried and had conducted previous searches. He said information given concerned events that took place 40 years previously and was “often inaccurate”.

“It’s been a long time for you to have to wait for conclusions as to what happened your loved one,” coroner Dr Myra Cullinane said to the Wright family.

The jury returned a verdict of unlawful killing.