Conflict over events leading to death of teen from peanut allergy 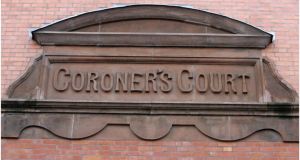 Caroline Sloan told the court she went to the pharmacy on O’Connell Street when her daughter Emma started to get “panicky, saying she couldn’t breathe”

A pharmacist who refused to dispense an epipen without prescription to the mother of a teenager who died from an allergic reaction told an inquest the “dynamic” would have been different if he had known it was for her daughter.

David Murphy told Dublin Coroner’s Court that when 14-year-old Emma Sloan’s mother came into Hamilton Long Pharmacy on O’Connell Street on December 18th 2013 to request the pen, he was not told it was for her daughter. Emma, from Mourne Road, Drimnagh in Dublin 12, was outside at the time.

“It would have changed the dynamic because I would have been able to ask different questions. I didn’t think I could verify a medical history if the person was a non-relative and if the person wasn’t there it was very difficult to make a clinical assessment,” he said.

However, Emma’s mother Caroline Sloan said she told pharmacy staff the epipen, an adrenalin shot which reverses the effects of anaphylactic shock, was for her daughter.

“I went over that night every night, for the last 15 months. I don’t sleep so I know what was said,” she said.

Emma became ill having mistakenly eaten satay sauce at a city-centre Chinese buffet restaurant. She began to feel her lips tingle and a staff member confirmed she had eaten satay sauce, not curry sauce as they had thought, Ms Sloan said. A picture displayed during the inquest showed a restaurant sign warning the satay sauce contained nuts.

Ms Sloan said they were on their way to the car to go to Temple Street Children’s Hospital and had turned onto O’Connell Street when Emma started to get “panicky, saying she couldn’t breathe”.

Emma’s aunt suggested going to the pharmacy for an epipen. Ms Sloan said she offered to pay for the epipen but the pharmacist said he could not dispense it without a prescription. He “dismissed” her and told her to go to A&E, she testified.

Ms Sloan went to get the car, leaving Emma with her aunt but when she returned minutes later her daughter had collapsed. The inquest heard that before collapsing Emma said to her aunt, “I am not going to make it”. Ms Sloan told the court she was “screaming like a lunatic” for someone to help. She knew her daughter was dead, she said.

Emma was pronounced dead soon after arrival at Temple Street. The pathologist gave the cause of death as acute anaphylactic shock secondary to a nut allergy.

Mr Murphy said pharmacists can give medication without prescription in emergency situations but certain criteria must be met.

When gardaí came looking for CCTV the following day and told him the pen had been for her daughter, he “nearly fell over”, he told the coroner. “I was in absolute shock and I think I still am,” he said.

Mr Murphy said Ms Sloan told them “someone” had been “in contact” with satay sauce. However, Ms Sloan said she did say Emma ate the sauce. “I am not a stupid woman. I told them that she was having an allergic reaction to a sauce that she had eaten,” she said.

The court heard Emma was diagnosed with a nut allergy at five years old and went to hospital three times after her lips swelled after contact with nuts. This was resolved with an epipen each time.

Ms Sloan said she was not given any advice on how to use the epipen or how serious the allergy could be. “We were never told she could die from this or that we should be carrying an epipen at all times,” she said.

She told the coroner she could not recall getting instruction in using the epipen by a nurse at Our Lady’s Hospital, Crumlin in January 2009.

Coroner Dr Brian Farrell said there are conflicts in the evidence he is “unable to resolve”.

He returned a verdict of death by misadventure and recommended people with allergies be given “some sort of objective evidence” they can show to third parties in emergencies.