Buncrana inquest: Occupants of SUV ‘should have been able to unlock car’ 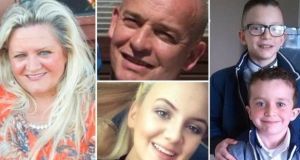 The occupants of the stricken Audi SUV that sank off Buncrana pier in Co Donegal killing five people should have been able to unlock the car in the water, a witness for the car-maker has told an inquest.

Gerard Boyle of Audi was giving evidence at the inquests in Buncrana into the deaths of Sean McGrotty (49), his sons Mark (12), and Evan (8), his mother in law Ruth Daniels (59) and Ruth’s daughter Jodie Lee Daniels (14).

The extended family, all from Derry, drowned when the Audi Q7 SUV that Mr McGrotty was driving appeared to slide on “treacherous” algae at the bottom of the slipway at Buncrana pier in March last year and slip into the waters of Lough Swilly.

Evidence was given of the car “bobbing” on the water for several minutes as it drifted about 20-25 metres out into the lough before it sank with the loss of the five lives.

On Thursday RNLI volunteer John O’Raw, a lecturer in computer science in Letterkenny and also a scuba diving instructor explained how he dived to the vehicle to check were any bodies aboard at about 7.55 pm on the night of the tragedy. Evidence from witnesses on Wednesday indicated that the car fully sank sometime after 7.20 pm.

Mr O’Raw tried to open the four side doors of the car which was then in about three metres of water but was unable to. He said Mr McGrotty’s driver’s window was broken but was intact and bowed or bent inwards into the car in a shape consistent with the driver having sat on it.

Evidence had been given that Mr McGrotty broke his driver’s side window with his elbow before he handed over the baby, Riochnach-Ann McGrotty to Davitt Walsh who saved the child.

Gerard Boyle of Audi said the company had tested the effects of cars submerged in water. But this applied to models from 2007 onwards and not earlier cars. The Audi driven by Mr McGrotty was a 2006 model.

But Mr Boyle replied “yes” when specifically asked should Mr McGrotty and others in the car as it drifted and sank into the water have been able to unlock the doors. “That is how it should work,” he said.

Mr Boyle also said that the electrics in the Audi should have continued to work for a number of minutes even as the water reached the rim of the window of the vehicle.

Mr Boyle said that regardless of the fact that the Audi Q7 SUV was a 4x4 vehicle once it lost friction on the slippery algae it could not be controlled.

John Leech, chief executive of the Irish Water Safety organisation, said that in any such emergencies the occupants within a minute should ensure that seat belts were released and that the windows were down to enable people to escape from the vehicles. The priority was to get children out first and then adults.

Mr Leech also produced two appliances, one or both of which he believed should be in every car. One was a hammer which could be used to break car windows that wouldn’t otherwise open.

The other was a “centre punch” appliance costing about €10 which could be used both to cut off unreleasable seat belts and break windows.

The inquest is continuing.