Children ‘almost guaranteed’ to get into difficulty at specific attraction, lifeguard says 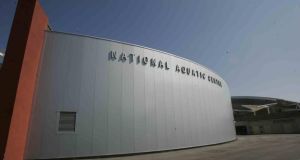 Children are “almost guaranteed” to get into difficulty at a specific attraction at the National Aquatic Centre (NAC), an inquest heard.

Logan Joyce (4) of Wotton Bridge, Ashbourne Road, Co Dublin was found floating face down in the ‘lazy river’ section at the centre on July 22nd 2012.

A resumed inquest into his death heard the lazy river attraction, a 120m long 1.2m deep section that circles the wave pool, was the main feature where lifeguards were required to take action.

Lifeguard Graham Smith said the current from the wave pool sucks children into the Lazy River and even children wearing flotation devices could get into trouble there.

“It’s the number one reason we would get in the water...they are almost guaranteed to get into difficulty there,” he said.

Children without flotation devices would be advised to get out before they were drawn into the Lazy River and if they did not a lifeguard would physically pull them out, he told Dublin Coroner’s Court.

“It sounds a bit daft but it wasn’t uncommon to have kids walking around on their own. Even if they were a few feet from their parents they could get into difficulty, it’s just so easy to happen,” Mr Smith said.

National Sports Campus Director (which includes the NAC) David Conway said a fresh safety audit had been requested and would be carried out by Irish Water Safety.

Logan was last seen alive in the wave pool area. “From the available facts it would appear he made his way all the way around the river,” Sgt Joseph Delaney said.

Logan was spotted floating face down in the water just before 6.30pm by a member of the public and taken to Connolly Hospital where he was pronounced dead. The cause of death was drowning.

Lifeguard Duty Officer Russell Ehbel, who has since left the centre, said children under eight require direct adult supervision and flotation aids can be bought at reception. He said ten lifeguards were covering 11 positions at the leisure pool that day but two other lifeguards said all positions were manned. Barrister for the NAC, Simon Mills, said the child’s death followed a “constellation of events that coloured the verdict available to the coroner.”

“The evidence is clear, Logan Joyce could not swim,” he said. The boy’s father “had insufficient flotation devices for the children he brought with him and he elected not to give Logan armbands when he knew Logan was not able to swim,” he said, adding that he “did not wish to add to anybody’s grief.”