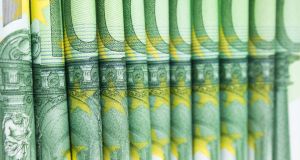 A woman went on a massive spending spree after a bank accidentally deposited more than €51,000 into her account, a court has heard. File photograph: Getty Images

A woman went on a massive spending spree after a bank accidentally deposited more than €51,000 into her account, a court has heard.

Margaret McDonnell (23) spent the money on items for her children, including bedclothes, clothes and shoes, Dublin Circuit Criminal Court was told on Wednesday.

For two weeks, Ms McDonnell ate out every night and bought gifts, including two crystal vases and a “crystal mushroom lamp”. She also brought family and friends out to dinner.

She spent a total of €24,946 from the accidental deposit.

At Wednesday’s hearing, McDonnell, of Rathvilly Park, Finglas, Co Dublin, pleaded guilty to 13 counts of theft of cash from Bank of Ireland on dates between March 7th and 16th, 2013.

Judge Cormac Quinn adjourned the case to April next and ordered a Probation Service report to assess Ms McDonnell’s suitability for community service.

Det Karl Smith told the court that, in March 2013, a Bank of Ireland customer went into the bank’s Finglas branch to get details for his account to allow the transfer of €51,808 into it from a foreign bank account.

He was given an IBAN number, but when the money did not show up later in his account he contacted the bank again.

It was then discovered he had been given the details for Ms McDonnell’s account instead of his own.

The following day, Ms McDonnell withdrew €5,000 from her account.

On discovering its mistake, the bank took back the €26,862 remaining from the original deposit.

They also wrote to Ms McDonnell asking her to repay the rest of the money, but she ignored the letter.

After her arrest, Ms McDonnell accepted full responsibility for spending the money.

She told gardaí that she had thought the money was hers as it was in her bank account.

“I just went on a high. It was such a lot of money. It was in my account so as far as I was concerned it was mine,” she said.

She said she spent the money “on everything and anything, stupid things”.

“Any young girl on social welfare like me would have done what I did.”

She said she ignored the letter from the bank because she was scared and had realised she had done something wrong.

Oisín Clarke BL, defending, said that his client had never had disposable income to spend before and had never been able to buy gifts for friends or family.

He said Ms McDonnell had never been in trouble before and had always tried to live her life in an upright fashion.

He said that she could not believe how stupid she had been.

He said she had “flittered the money away” and had nothing to show for it.

Mr Clarke said Ms McDonnell was in receipt of €250-a-week in lone-parent allowance and could only afford to use €10 or €20 out of this to repay the stolen money.

1 President Higgins says British must face up to their history of reprisals
2 Wife not entitled to deceased husband's entire estate, High Court rules
3 Life in Level 3: What will happen under new restrictions in Dublin?
4 Coronavirus: Public health experts considered idea of moving Dublin to Level 4
5 Why are some in Fianna Fáil unhappy with Micheál Martin?
Real news has value SUBSCRIBE