Woman pleaded for help when brother collapsed during burglary 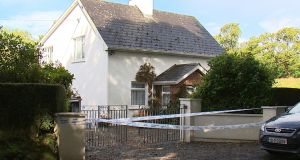 John O’Donoghue and his sister, Christina, had returned home from Tipperary town when they interrupted the intruders. Photograph: Liam Burke/Press 22

The sister of a man who died while their home was being burgled pleaded in vain with the intruders to help, Limerick Circuit Court was told on Friday.

Christina O’Donoghue’s evidence was heard on Friday at the sentencing hearing of cousins David Casey and Michael Casey.

Both men pleaded guilty to breaking into John O’Donoghue’s home on August 27th, 2015. The 62-year old bachelor collapsed and died of a heart attack as he watched the two defendants ransacking his cottage in Doon, Co Limerick.

David Casey was on bail for two robberies at the time, the court heard.

“I called on the them to help, but no one came to help,” Ms O’Donoghue told gardaí. “By then, I didn’t care they were in the house . . . I just wanted somebody to help my John.”

The defendants were part of a three-man gang that went around the country targeting isolated rural communities. Their “modus operandi was to hit cottages and older houses which had no visible signs of security systems,” John O’Sullivan, prosecuting, told the court.

The cousins pleaded guilty to a spate of burglaries in the southeast Limerick and Tipperary border regions on the day. A third man, who drove the gang’s getaway car, is still at large, the court was told.

Mr O’Donoghue and his sister, Christina, had returned home about 2pm from a shopping errand in Tipperary town when they interrupted the gang.

“They became suspicious someone was in the house,” Sgt Mike Reidy told the court. “John approached a side door and saw it had been broken. His sister told him to be careful. At this stage, the driver of the getaway car was sounding the horn ... trying to alert the other two men.”

“John O’Donoghue got a shovel out of his shed as he was concerned for his safety. He stood near the house. His sister knew by him that he wasn’t feeling great. He collapsed down in the yard. His sister tried her best to resuscitate him.”

The driver of the getaway vehicle sped off while the cousins who had been “ransacking the house” fled through fields at the rear of the cottage.

A number of local people alerted gardaí after spotting the pair running along the road. Local gardaí Bill Collins and Elaine O’Donovan, who had arrived on scene and tried to resuscitate Mr O’Donoghue, later apprehended the defendants about 2km away on the side of the road.

However, the autopsy concluded Mr O’Donoghue’s death “cannot be separated from the circumstances that occurred”.

“The stress of the situation would have caused an increase in his heart rate and he would have been at greater risk,” Prof Cassidy said.

In a victim impact statement written on behalf of the O’Donoghue family, Angela Denning, a niece of the deceased, said: “Words cannot describe the impact of this break-in on our family. We lost a kind, clever, talented and very witty man. We miss him terribly. A very happy home is now missing something that, unlike stolen possessions, can never be replaced.”

Judge Tom O’Donnell heard the two defendants had not intended anyone to be harmed and that they were deeply remorseful when told of Mr O’Donoghue’s death.

Adjourning sentencing to December 15th, the judge expressed his sympathies to the O’Donoghue family. “I don’t wish to unnecessarily prolong matters, but I have a duty to consider everything I have heard.”