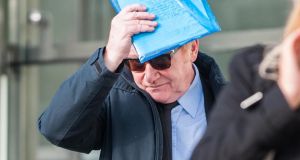 Christopher Corcoran outside Dublin Circuit Court after he was found not guilty by direction of holding a Securicor staff member and his family hostage in 2005. Photograph: Collins Courts. 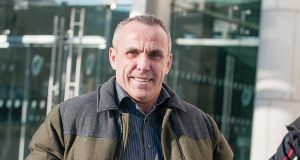 Mark Farrelly outside Dublin Circuit Court after he was found not guilty by direction of holding a Securicor staff member and his family hostage in 2005. Photograph: Collins Courts

Two men previously jailed for taking part in the kidnapping of a family have been found not guilty after a “dramatic” ruling that mobile phone records cannot be used as evidence in the case.

Mark Farrelly (43) and Christopher Corcoran (67) were convicted in 2009 of kidnapping cash in transit van driver Paul Richardson and his family during a €2.28 million robbery in 2005. They were sentenced to 25 years and 12 years respectively.

In 2012 they were freed after the convictions were overturned by the Court of Criminal Appeal on foot of a Supreme Court ruling that search warrants used in this and other investigations were unconstitutional. A retrial ended in December 2013 with a hung jury.

On Thursday, Judge Mary Ellen Ring directed the jury to find the men not guilty. They will not face any retrial.

This followed a ruling by Judge Ring on Wednesday on a defence application challenging the admissibility of mobile phone records.

Prosecuting counsel Dominic McGinn SC told the court the ruling had a “dramatic effect” on the case.

The records made up the bulk of the State’s case against the men. They allegedly pointed to a network of nine mobile telephones used by members of a kidnap gang to plan and execute the robbery.

The armed gang burst into the Richardson family home on the night of Sunday March 13th, 2005 and took Marie Richardson and her two teenage sons, Ian (17) and Kevin (13), into the Dublin mountains.

They were held there overnight while Mr Richardson was held at gunpoint at his home and told to go to work as normal the next day and deliver the cash to a car park of a pub in the Strawberry Beds, Lucan, south Dublin.

Mr Richardson testified that he was crying so much out of concern for his family that he could hardly drive the van. After the ordeal came to an end he collapsed on the side of the motorway.

The stolen cash has never been retrieved and Judge Ring noted that the events continue to impinge on the family’s life ten years on.

Corcoran of Bayside Boulevard North, Sutton and Farrelly of Moatview Court, Priorswood, Coolock had pleaded not guilty to falsely imprisoning the Richardsons at Ashcroft, Raheny on the night of March 13th and robbery of €2.28 million in cash from Mr Richardson and Securicor Security Services Ireland Ltd on March 14th, 2005.

The legal argument centred on whether records from mobile phone masts could be relied on to link the phones to the robbery by placing them at relevant times and places.

Detectives have developed the network of phones out of a single call allegedly made from the Dublin Mountains to the Richardson family home during the kidnapping. Mrs Richardson testified that the gang had allowed her to call her husband from the mountains.

In ruling on the defence application, made in the absence of the jury, Judge Ring said that none of the three mobile phone network experts called by the prosecution could say that the relevant networks were fully operational and functioning on a given day or whether any particular cell sites are out of operation on those relevant dates.

She said there was evidence that calls could be routed through another mast if the nearest mast was not operational at the time or if it was busy.

The defence application relied on the 1992 Cochrane judgement from the UK appeal courts which held that the prosecution must provide “appropriate authoritative evidence to describe the function and operation of the computer” in the case of records automatically produced by a computer.

The Cochrane ruling was adopted by the High Courts here in a 2006 ruling.

The original 2009 trial was the longest-running criminal trial in the history of the State, totalling 66 days.

Marie Richardson told the trial that she was in her home with her son Kevin, then aged 13, when they heard a knock on the door. She assumed it was her husband who had gone to pick up their other son Ian from football practice.

When she opened the door four masked men forced their way into the house. One of them grabbed her by the throat and forced her up against the wall before she and her son were led into the sitting room.

One of the men was described as extremely heavily-built and wearing a boiler suit which did not fit so he was forced to tie it around his waist. Another man was “sweating profusely” as he confronted the family.

The men then brought in a box containing an Uzi submachine gun, revolver, a knife and a Polaroid camera.

A short time later Mr Richardson and Ian - then 17 - arrived home and were also brought into the sitting room. When Ian saw the scene, he had a panic attack and had to be given a paper bag to breathe into.

One of the raiders, armed with the revolver, took Mr Richardson into a back room and told him that they wanted him to do.

Mr Richardson later told gardaí­ the man seemed to have an intimate knowledge of Securicor procedures and terminology, such as “buster button”. He also had what was either a Securicor walkie-talkie or a Garda frequency scanner.

The raiders took the Richardson mother and sons to a secluded area called Cloon Wood in Co Wicklow, leaving Mr Richardson to spend the night captive in his home. At one point in the night the raiders allowed him to speak to his wife through a mobile phone held by them.

The next morning two raiders took Marie, Ian and Kevin Richardson up a path in the woods prior to their release and bound their wrists with cable ties. When the men got a call to say the €2.28m had been deposited and they left.

The family managed to free themselves using a small knife attached to Kevin’s key ring.

In the meantime, Mr Richardson travelled early to work the following morning. He convinced his work colleagues to help him carry out gang’s orders by showing them the Polaroids of him and his family at gunpoint.

After dropping off the cash the gang instructed Mr Richardson to then keep driving west on the Galway road until they contacted him via a walkie-talkie to tell him his family had been released. This call never came despite Mr Richardson carrying out the gang’s instructions.

Mr Richardson become extremely agitated and stressed at this point and began to suffer chest pains. His two colleagues, who Mr Richardson had informed about the kidnapping, became concerned for his health and decided they had to take the cash van off the road and raise the alarm.

Meanwhile Mrs Richardson and her sons have been left tied up with cable ties in the Dublin Mountains but had managed to escape and find help.

Mr Richardson was in a state of severe shock. When Securicor management told him over the radio that his family was unharmed he collapsed on the roadside.