Appeal to Circuit Court by Jason Lester, aged 15 at time of demonstration, not opposed by State 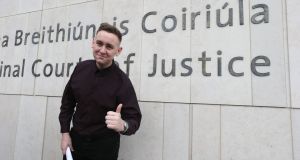 Jason Lester (18) from Brookview Close, Tallaght, Dublin had a guilty verdict against him in relation to an anti-water charges protest in Jobstown overthrown on appeal. Photograph: Collins Courts

A Dublin youth found guilty of false imprisonment of former tánaiste Joan Burton during the Jobstown protest had the verdict overturned on appeal on Monday.

Jason Lester (18) from Brookview Close, Tallaght, Dublin was aged just 15 when he took part in the protest in November 2014 and later ended up arrested, questioned and then put on trial last year.

In his trial last year at the Dublin Children’s Court, Judge John King said he was satisfied a schoolboy was guilty of the false imprisonment of Ms Burton but he was discharging the youth conditionally on good behaviour for nine months so he would not have a criminal record.

On Monday, following a three-year fight to clear his name he won his appeal against the verdict in the Circuit Court.

The teenager had denied falsely imprisoning Ms Burton and her adviser Karen O’Connell for three hours in cars at the Fortunestown Road in Jobstown in Tallaght during a protest against water charges.

Giollaoisa O Lideadha SC, defending, said the State’s application was that the appeal would not be opposed. He also said that though the appeal came from the Children’s Court, his client, who did not address the proceedings, was now aged 18 years.

Judge Patrick Quinn said he was allowing the appeal and agreed to grant legal aid to the youth’s lawyers who cited the complexity of the case.

In October, charges against 10 of the 11 Jobstown water charge protesters were formally dropped at Dublin Circuit Criminal Court. In June, six men, including Solidarity TD Paul Murphy, were found not guilty by a jury of falsely imprisoning the politician and her adviser following a nine-week trial.

Charges against a seventh man were dropped halfway through that trial.

Speaking to reporters afterwards, Mr Lester said: “Today my convictions for two counts of false imprisonment have been overturned. The past two years of court proceedings have been extremely stressful.

“They have taken a toll on my health and on my family life.

“I was prosecuted with serious offences of false imprisonment when I was only 15 years old, for taking part in a legitimate political protest. I have always maintained my innocence and today I have been exonerated.

“I would like to thank my family for their continued support, the general public, the people of Tallaght and my legal team for all the work they’ve done on this case.”

In Jason Lester’s trial last year in the Children’s Court, the defence cited the right to protest and freedom of expression under the Constitution and the European Convention on Human Rights.

However, the trial judge John King held that these protections were not unqualified rights and were subject to conditions and penalties as necessary for public safety and disorder, crime prevention and protection of the rights of others.

The teenager had told gardaí he was sorry for the stress he caused to Ms Burton, his trial was told.

Videos obtained from YouTube, RTÉ as well as Ms O’Connell’s phone were shown during the lengthy hearing and the court heard evidence from the two complainants and garda witnesses.

The youth had no prior criminal convictions and testimonials were furnished to the Children’s Court. The trial judge had complemented the teenager on his realisation of the necessity for social justice and he noted the youth’s previous good record as well as work he has done in his community and for charities – including helping the homeless, for which he has received awards.